Image quantizing is the process of reducing the color count in an image in order to make it compress better (in png or gif formats). It is so a lossy method of compression, however a consistent one at that. Why someone should do this, and how it can be done the right way? This article tries to cover these subjects.

Why quantize? What is it?

So first, why quantize images: what is the benefit, where it is necessary? Some good points for quantizing are as follows:

Then, how this quantizing works? In very short summary, it increases the compressibility of an image by reducing the color count, so larger areas on the image end up being represented by the same binary value (which is good for compressibility). The color reduction is performed by intelligently figuring out ares of the image which are almost identically colored, and selecting an appropriate color to fit all. The PNG and GIF image formats can benefit from this greatly.

What tools do I need?

First and foremost, you might have some image manipulation program. It likely can quantize, and save in PNG format. But better forget it. If you want something fast, you may want to visit PNGQuant, and from there TinyPNG, which is the best quantizer available so far, and it is even accessible online on the latter site for trying out.

Otherwise, there are some other notable tools, which will be looked upon below. One of those covered is my own experimental quantizer relying on PNGCrush and ImageMagick.

The quality of quantization

This image will be used to show how quantizing works

Since quantizing is a lossy operation, it is important to know how to judge the quality of the images passed through the operation, to see when the size-quality trade-off is right. First these aspects will be demonstrated using three quantizers:

Probably the most important parameter when quantizing is the desired color count. The more colors are permitted, the better will the image look, however it will also be larger. 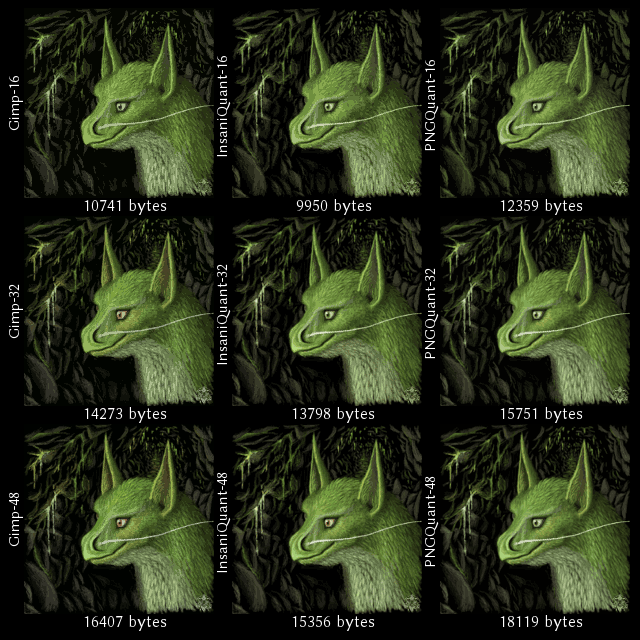 Result images from the three quantizers

For the first glimpse, the nine images might look very similar. However, check the small details: 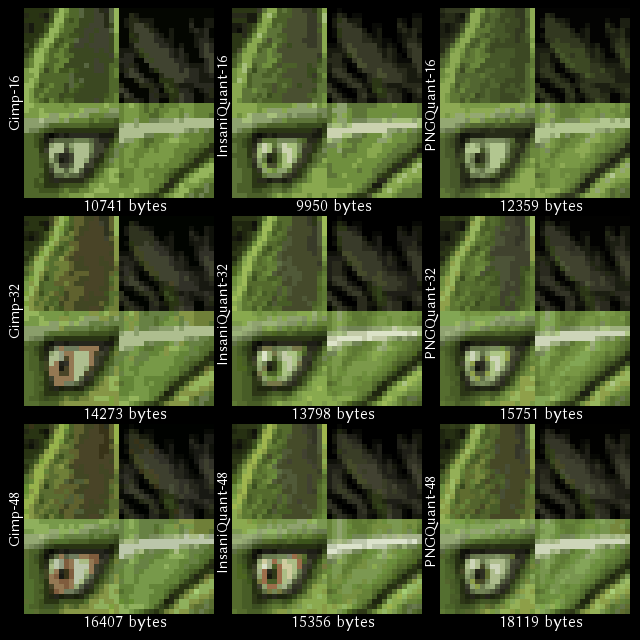 So basically these are things to look out for when observing the palette generation. Note that dithering was disabled: it makes easier to judge the quality of the palette, which is the most important characteristic of the quantizer (so you should always run such a program without dithering first to see how it performs in selecting colors).

For PNGQuant's credit it must be mentioned that it reproduces gradients exceptionally well which will be shown further below. It performs better in quality for larger color counts (which is the more important for most use-cases). 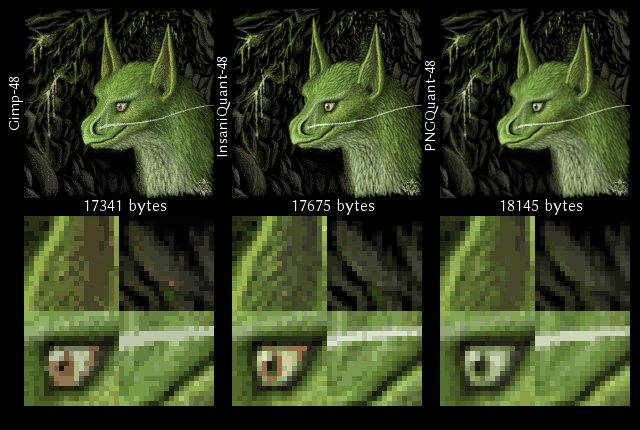 In general the problem with ditherizers is that sometimes in some applications they litter around a lot of "noise": individual pixels which are colored notably different to their environment. This artifact is usually noticeable, however it should be remembered to be checked for example when bulk-converting.

Ditherizers, if they behave properly, can increase the quality of the image at the same color count, however they also make the image less compressible. They should only be turned on when the image is already covered well with the palette, or a color count constraint (typically 256 colors) is reached without achieving the desired quality, such as banding is still present.

Banding when quantizing the Firefox logo at 64 colors

Banding is the most observable on the globe. If dithering was enabled, it wouldn't be visible, however the generated palettes would still miss these colors: dithering would have to mimic those. This increases the size of the images. A better solution observing such a result is increasing the target color count until most of the banding becomes tolerable, and only turning on dithering then (while observing the resulting sizes to see which works out best).

Now, onto the differences between InsaniQuant and PNGQuant. The base of the strange size difference is that PNGQuant is capable to produce ARGB palettes into the appropriate PNG format while the scripts governing InsaniQuant only produce an RGB palette with a separate full alpha layer, which compresses worse. PNGQuant is better at gradients: while the observable banding is about the same, PNGQuant also used colors to generate the shadow in it's output ARGB palette.

What should be quantized

After the long details on quality matters, let's see what should be quantized, and probably what not. First, the most important lossy alternative: JPG. 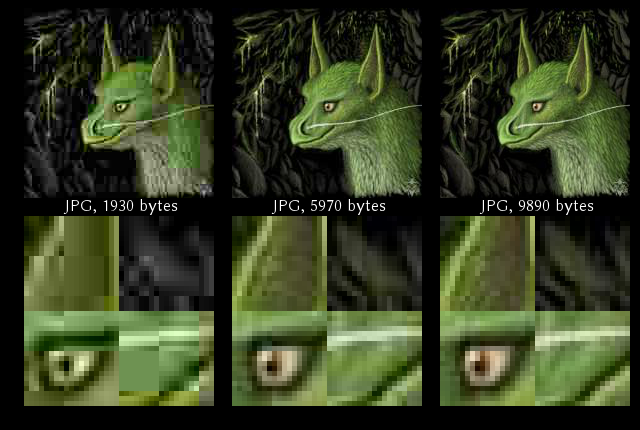 Saving the test image as JPG

The leftmost image, of course, is completely unpractical, it just demonstrates the nature of JPG artifacts: the behavior of large chroma blocks and in general, blocking. The middle image is one where at first glimpse the artifacts may not be that apparent, however comparing with the leftmost, they can be identified. The rightmost image is about what could be used for web presentation in case where high quality is not important: it differs from the original, however it is pleasant to look at, and represents the subject properly.

Compare the sizes: even the rightmost image is smaller than either of the quantized variants while producing a better looking result than either. This is one case where quantizing is not the right approach.

So in general, what should be quantized?

What definitely should not be quantized?

What to use for quantizing?

Like mentioned and demonstrated above, the best all around solution is using PNGQuant: it will definitely give you the best results for the most typical scenarios.

Quantizers may also be used to produce some interesting effects, notably by reducing the color count of images to some particular strange target. Producing similar images to the examples below are only possible with my InsaniQuant quantizer (only that offers a target palette depth setting suitable for these).

So let's get some pictures for an EGA: Enhanced Graphics Adapter, that old thing from the past with "digital" output, capable to produce 16 colors out of a pre-defined palette of 64. 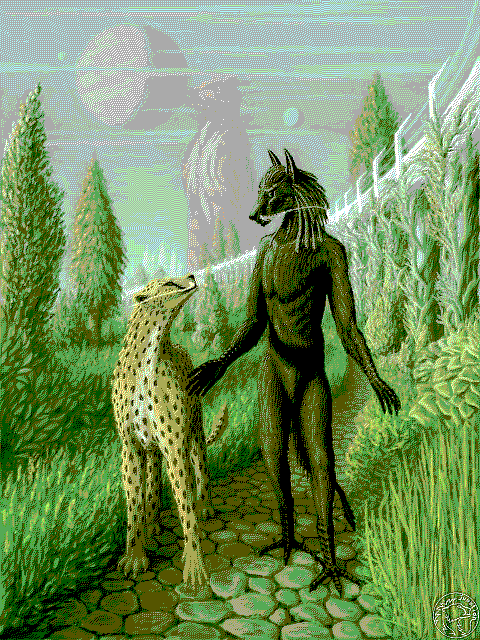 Cheetaan scene for the EGA 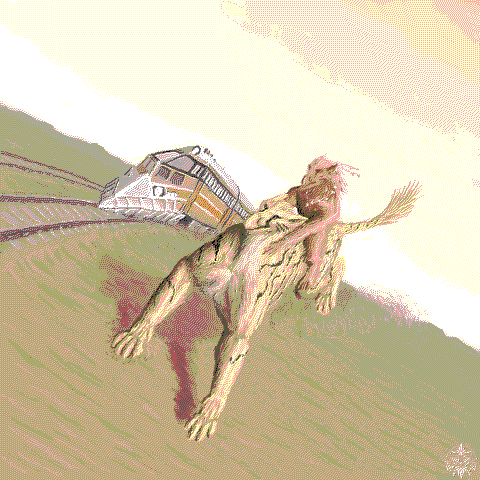 Shiriat racing the train scene for the EGA

Let's get even below, what about some Spectrum style? Only eight colors to choose from: 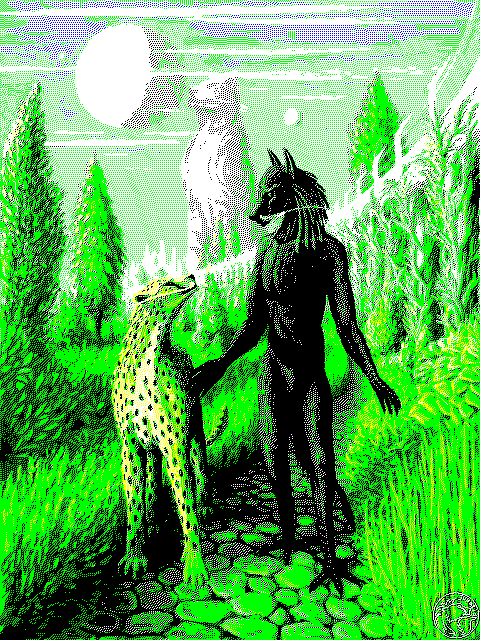 Of course these images are larger than what was possible to display on the old EGA (which had at most 350 pixels vertical), but I found these interesting. The feature of depth-limiting the palette is also useful for other targets, however for example for an Amiga PNGQuant can also generate a palette (with it's posterize setting which can go down to produce a 4 bit target).