Summer is around the corner, spring is slowly passing away with it's early flowers and blossom, so I thought it is a nice time to organize the results of the several photographing trips I did to the local mountains. Well, check it out for a bit more talking, and a lot more photos! 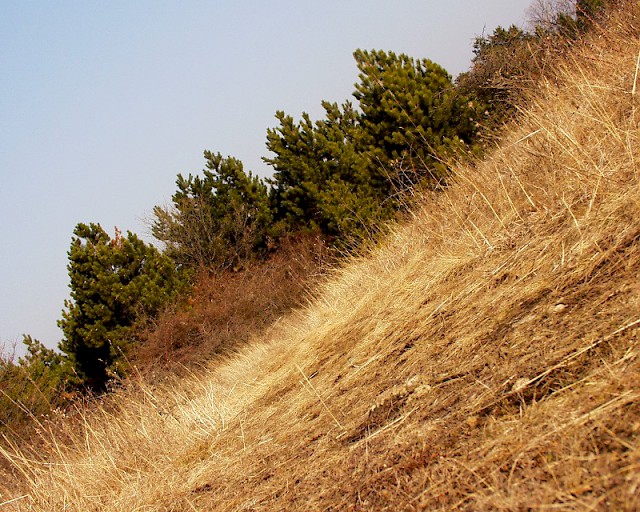 Early march - everything is still sleeping

Spring approaches slow, a few green, some early flowers, then all of a sudden, colds and ice taking everything down, but the change is still inevitable. It is for me the most interesting season of the year, not for the romantic cliché, but for that, undoubtedly, how nature wakes up from it's winter slumber is definitely something exceptional! In spring, you could visit the same place every week, and yet it will look notably different! 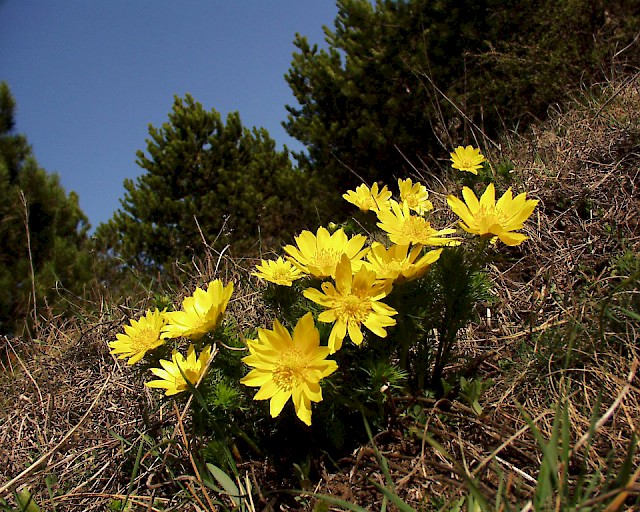 Pheasant's Eye - one of the early risers, the blossom lasts for about a month

The most remembered feature of spring by the common people is obviously the large variety of flowers blossoming. They really come in all sizes, shapes, and colours, and make probably one of the notable changes during the season. With flowers, bees, butterflies, and a variety of other bugs rise to harvest this "gift" of nature. 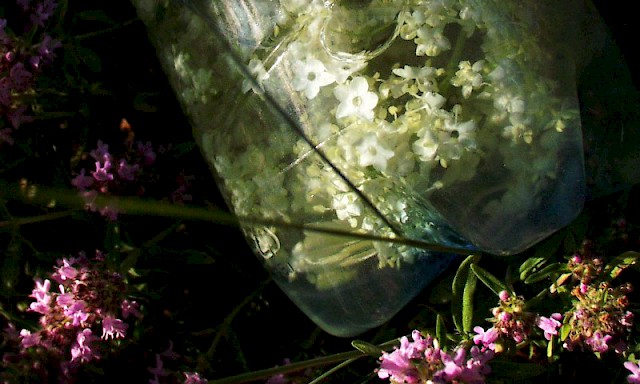 But enough of that, everyone knows these, there are way more interesting things to do than to talk about Spring in general here. I most frequently just visit the hills above the town, after all, if you don't even need to take a bus, just walk up, then why not? Being near the capitol annoyingly there are just a little more people up there than how many should be. They should have never built a paved road to the top of the mountain and even let mass transit there. You get to see ones who run wheezing aloud you could hear from the other side of the valley to express how tired they are while you will take them over with your normal walking speed, there are others with two hiker sticks probably imitating some real hiking while I hadn't seen any even unmarked track yet on which any of those poles wouldn't even rather be an encumbrance, and at last, the most annoying ones are those who get to ride out with those steam engines... Eh, dogs. One time I even was on the edge of jumping up on a tree on a more remote track in the fear of a warthog attack when I realized I just got scared off of a runner who pulled around that four legged steam tank making such an outrageous noise in the process that all the capable wildlife probably moved a mountain away. 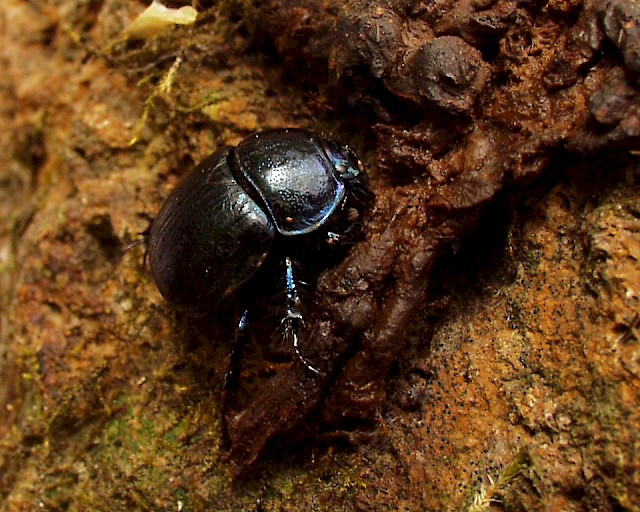 So you say you had a shitty day? Just look at me

Well, after coping with the facts one needing some real deep breath of fresh air, nature, and some good solitude will rather look a bit more around - and it will turn out to be worthy! You will realize ninety percent of the people going up there just does his thing on the marked tracks, and won't even go down on a dirt road unless the marks are on the trees (And well, of that remaining ten percent comes the fourth annoying type, those morons who looking deep in a map get lost in a lousy hectare patch of forest and wouldn't be able to get out). So I got to be like marching fast on the marked trails knowing where interesting unmarked areas are where I slow down for breathing in the fresh air, photographing, sometimes reading and drawing, and in general, enjoying the feel of nature.

A male European green lizard marching around as usual

Lizards! One of the most interesting creatures here are these little reptiles who are so since they are, well, not insects at last, are large enough for some studying, and aren't so shy that one wouldn't be able to get near them if he was careful enough.

Walking over these mountains I got to identify four distinct species of them, and took photographs of three. The easiest to spot are those large male European Green Lizards (Lacerta Viridis). They could even be recognized easily after some experience from their characteristics rustling they make as they walk around even before actually spotting them, or one might even fall right in front of you fleeing from a battle. When photographing, that turns out to be a pain though: these males just wouldn't sit still, so it's not much possible to compose an image, and they neither let one nearer than about a metre to them. An especially annoying occasion was when I thought I will try to exploit that little remote came with the camera. So I studied the pattern the lizards were marching, set the camera in place on a rock looking at one of the spots they frequently stopped at, and walked away with the remote. Waiting, waiting, and even more waiting. The lizard would go up the rock, just out of the sight of the camera, and after some circling around, he got to be sitting right next to the lens of the blasted thing! It was patiently sunbathing there for like a half hour, like he knew how much he pisses me off by this act, and when he thought it enough, he just walked away behind the camera. It would have been a fun shot if I had a mobile phone or something to capture this... 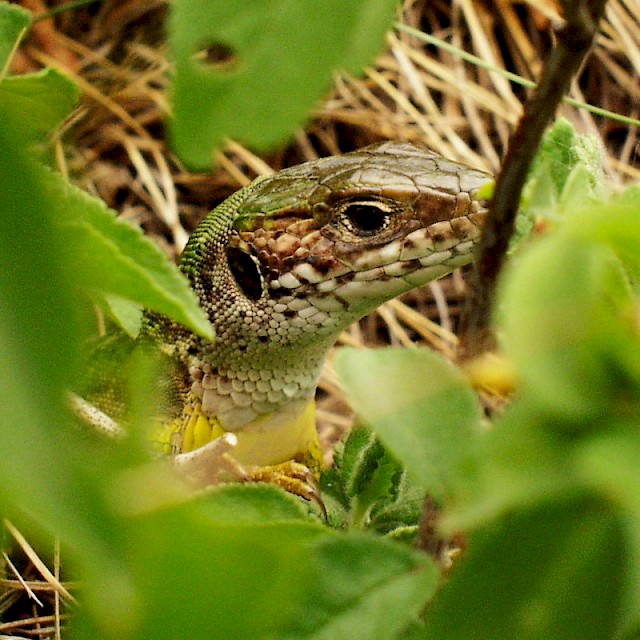 Sand lizard peeking through the foliage

The next more common specie is the Sand Lizard (Lacerta Agilis). They are fairly harder to spot as they seem to rather like standing still, so you won't likely hear them. To get one, one needs to walk silently and listen: that way a frightening lizard of this specie won't run away far. After it is spotted, it is rather easy to get in the business of actual photographing: these lizards don't seem to be too shy, so one with care could even get in just a few dozens of centimetres distance. For me it turned out I would rather frighten them after a point by the noise the camera makes when focusing than by actually approaching them. One even seemed to be rather curious about the lens. 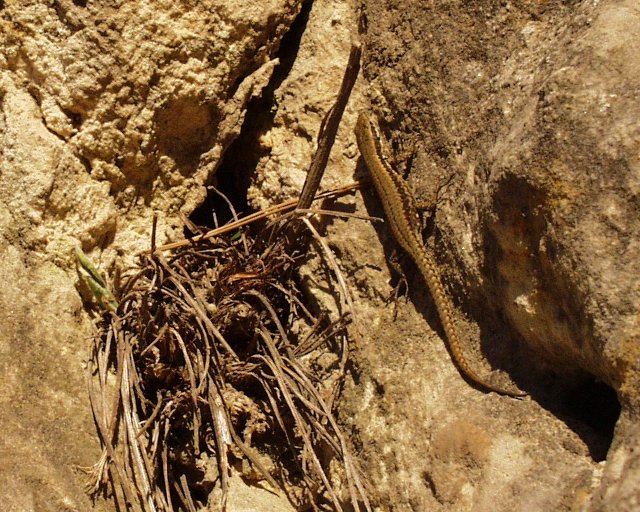 Wall lizard on the side of a grit rock formation

Wall lizards so far weren't too fruitful at photographing. They are rather small, and added to this, whenever I got to see them, they seemed being too active for composing anything, just like those larger green lizards. They are not rare though, they could be seen zipping around on rocks, and may also be identified by their rustling (which for their smaller size is rather faint, may be mistook for some larger ground beetle).

The most repulsive specie I got to see (twice in this spring so far) is a sub-specie of Juniper Skink called "Pannon Lizard" in Hungary. These lizards seem to live under the leaves in darker places, although when I got to see them, they didn't actually seemed to be too shy and wouldn't flee too easily. Nevertheless I didn't want to disturb them by photographing (which would have involved flashing or the rearranging of the leaves to let more light in). 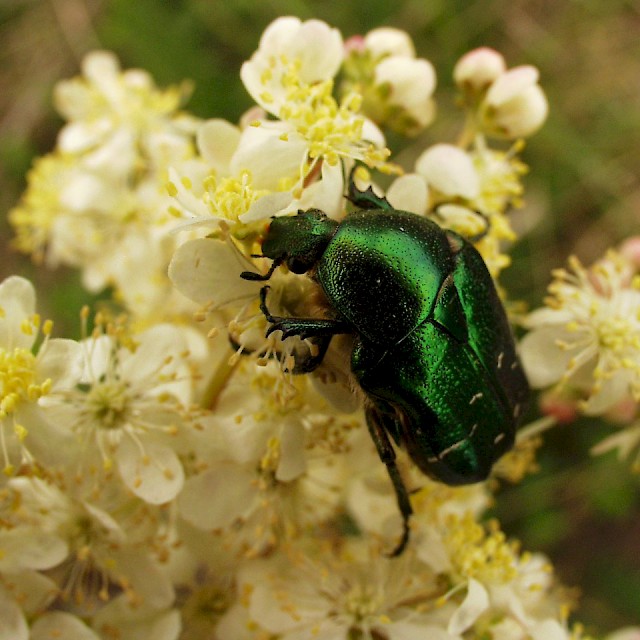 One rose chafer of the many buzzing around the bushes

Bugs, bugs and bugs, they are everywhere! Of course they are, from a point one wouldn't even notice that they are buzzing, marching, dropping and bumping in things all around! First time hikers may mistake the rose chafer's buzzing with bees and fear of the non-existent stingers, some unsuspecting child with a collector mind may pick up that nice large black beetle wading slowly forward on the ground - just to experience the unbearable stench of a specie of darkling beetle, well, rule nro. 1 is "don't touch" anyway, not? 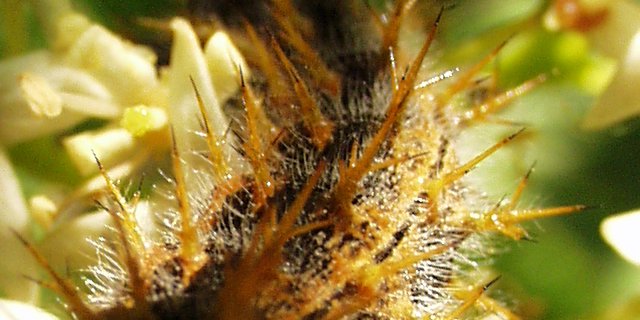 Rule nro. 1: Don't touch. Guess this time it's needless to be said.

Butterflies may also produce bizarre things, especially their caterpillar forms. The above section is the back of a particularly bizarre one, something like I hadn't even seen before. I spotted it on the ground where ants were trying to bring it down, guess it fell from a tree above. Interested, I picked it up, carefully removed the ants (they couldn't do any apparent harm to it yet), and did some photographs. Wonder what it could be? Probably some larger specie of moth, after all those have these scary looking caterpillars. 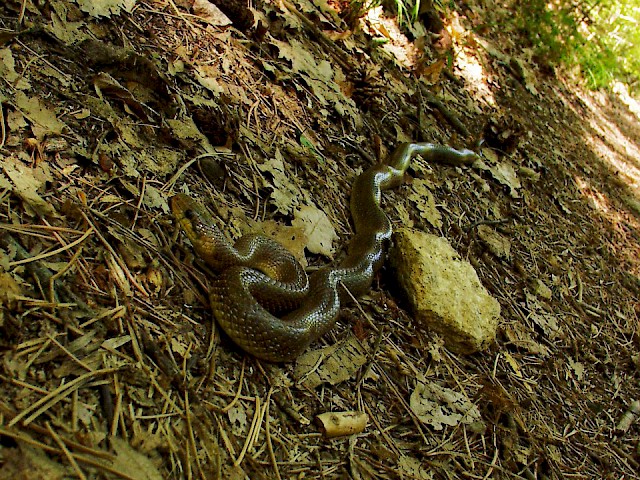 A piece of sprinkler tube was just laying there

Away from these thorny things, a little back to the reptiles. I was really surprised one day when just ahead of me, right in the middle of the path, that piece of sprinkler tube was just laying there. I wouldn't even hope for snakes here, but as this proves, even they could be found! A nice large Aesulapian Snake, not uncommon, but I thought it would more like areas where water surfaces or streams occur. This one was at about 120-150 centimetres in length. On the related Wikipedia article they state these snakes average at 110, and reach a maximum of probably 200. I think they quite underestimate them! In the Bükk mountains I found specimens longer than two meters twice, one of them probably even reached 3 meters in size! It was notably longer than how tall I am, and I am not a short guy. 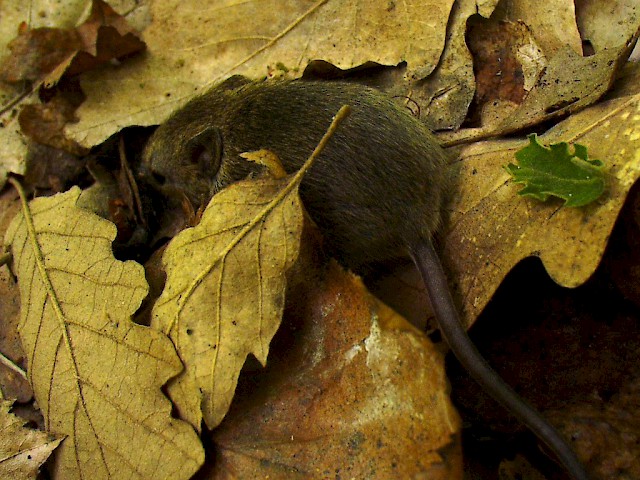 Common vole under the leaves

Sometimes I don't just walk on trails, from times to times, especially in the past when I lived near Bükk mountains, I set courses right across the woods. Sometimes this happened just for that I wanted to short-cut from some vanishing trail I didn't try before, sometimes purposefully knowing some specific landmarks like small caves or springs hidden in the forest. One such time here I happened to spot a vole, well, nothing extraordinary, I had seen them a lot in Bükk, but not here. Probably they hide from the much larger traffic than there. 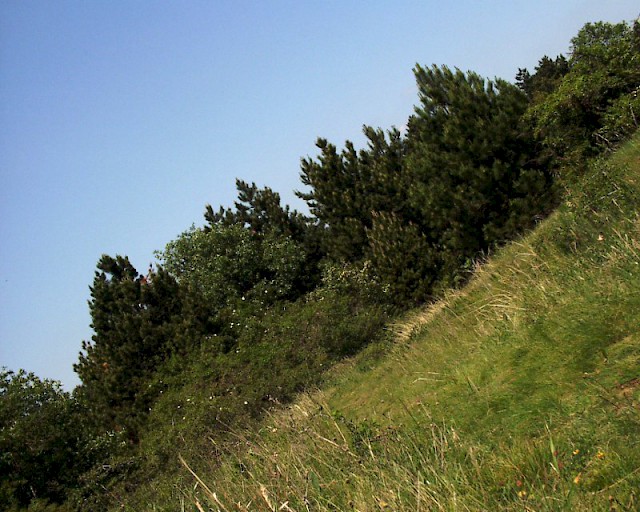 Late May, there is quite a difference!

So that was it, the Spring passed away turning in Summer, and so this collection ends here. Check out the images section below for even more!

And well, another important thing to note: The images all were taken with my old Olympus C2500L digital camera, 1999, made in Japan. Nice little machine!