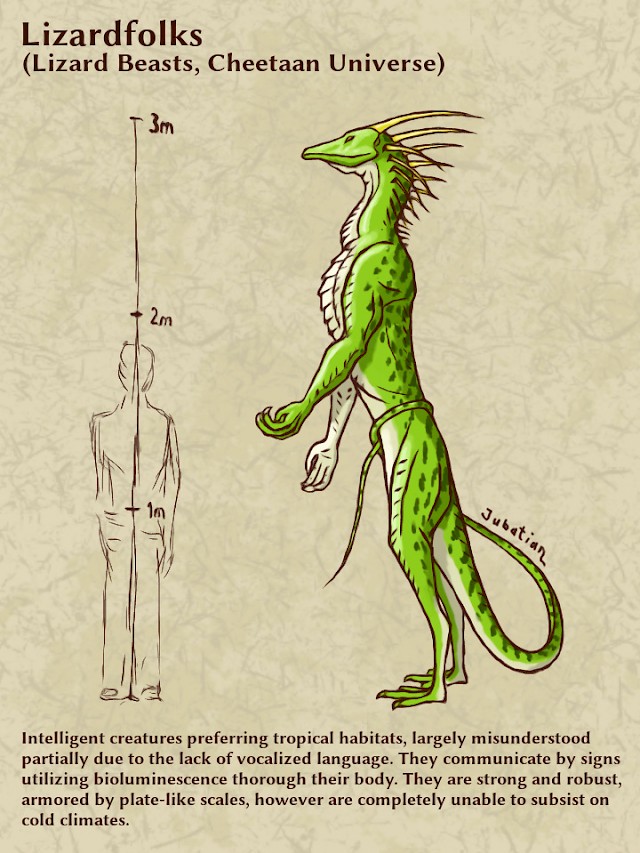 A bit of retouch on an old creature part of the Cheetaan Universe.

The original design was a rather conventional anthropomorphic reptilian, which didn't feel too interesting.

Now they have a theropod structure with this upright stance. When walking, they may keep this stance especially in more confined spaces like buildings, however in the open, and when running, they prefer a theropod-like motion, balancing themselves with their long tail. Wrapping it around their waist is normal otherwise, although when not moving around much, they may let it rest or drag on the ground.

Apart from balancing, the tail has a role in combat, mostly in self-defence, it is a powerful whip capable to even break bones of human sized creatures, however the sonic boom itself is often enough to deter an attacker.

The general appearance is lizard-like, although the scales on most of the body are rather like those of pangolins, strong plates, potentially deflecting even bullets. Like in some fantasies (particularly Battle for Wesnoth, drakes), they have a weakness in this defence, it is possible to pierce them under these scales. Their thermoregulation and thermal insulation is also rather poor, making them unable to subsist on cold climates (it is not as bad like lizards, however below zero, they are pretty much frozen).

The most unusual feature I imagined for these creatures is their communication: They would rely largely on bioluminescence, mostly on their face, but also thorough their body, if they wanted to, they could emit some eerie glow through their luminescent spots, not unlike some creatures in the Avatar movie (however I don't think they used the idea this way, while the probably most notable extant example, fireflies, use it for messaging).

Their brain is so deeply wired to this sort of communication that they are barely able to learn even to understand spoken commands. They themselves are not really able to vocalize. As an interesting consequence, mute or deaf people have the best chances to make deep bonds with them, developing sign languages.