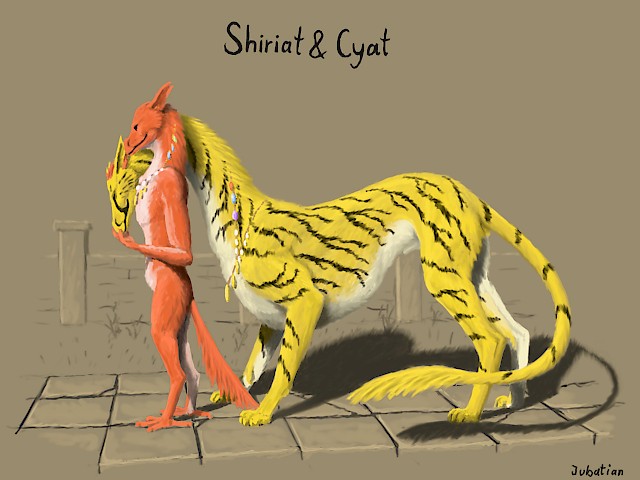 A pair of Shiriat and Cyat. The Shiriat is the red maned wolf like anthropomorphic creature, the Cyat is the large cheetah - horse mix quadruped.

Getting better over the years with them. Certainly better than this reference sheet, not to mention what was before (so awful I didn't even care to post it here).

And finally both of them at their proper, normal weight!

I decided to draw this one after two gift images I painted on a sudden impulse to a friend, with my substantially overweight Cyat character: A soft and fluffy bed, Full Sail Ahead.

The Cyat is a strange beast.

Looks like a carnivore, but in fact he wouldn't be viable in the wild. Their digestion is poor, adapted to prepared meals, the civilization they are part of. Their beak-like structures in the past supposedly were true beaks, but their edge in the present day is blunt, and they have no incisors (neither the Shiriats), only molars more adapted to omnivorous diet. They would starve and die if left on their own, unable to save themselves with their strength or even the creativity of their complex brain, which is actually even bigger than that of a Shiriat.

So they are tied together in this manner, the Shiriats loving these big and strong companions of theirs, sharing their world on equal terms. The lean and frail looking Shiriat also shares the limitations of the Cyat, but she has her hands to craft, and even in case of an apocalypse, wouldn't ever leave her Cyat companion to die. She would need him even the more then.