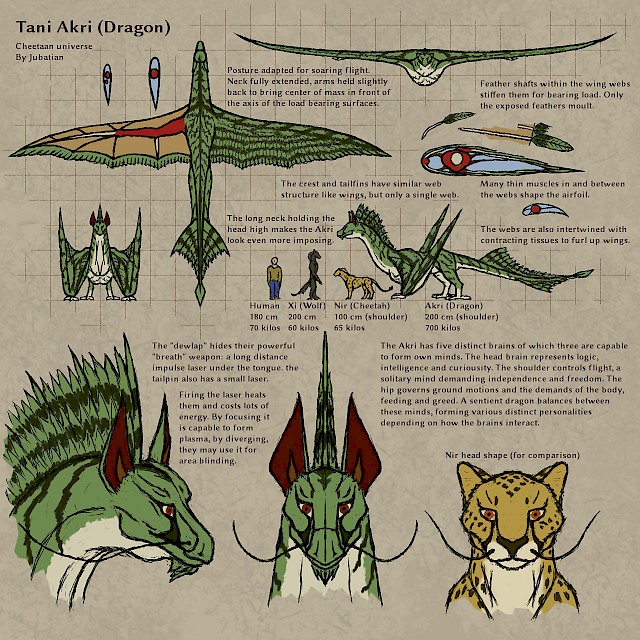 After several attempts and redesigns this probably got to be something which could perform soaring flight by the laws of physics, which is essential for such a large beast (and especially essential in their environment on their planet).

In the latest iteration, he got slightly longer neck and shorter body (compared to this), probably making his proportions look even better than before (in my opinion), and more importantly coupled with minor design changes in the wings, his balance should be about right for gliding, while he neither falls on his nose when walking around on the ground.

Some minor details missing from the picture. The "propatagium" in front of the fingers on the outer wings also fold up, against the finger. It is held extended by the same massive extensor tendon like that existed in pterosaurs along with the finger. The short section between its first bone and the pteroid is contracted in normal flying position, so it may extend as the Akri folds up the wing for a dive or furl it up on the ground. Most of the wing and fin coloring are simply result of the coloring of the feathers themselves, their base being dark as shown above the wing cross section.

A lot of the design comes from exploring further on this older article.

The big ears were partially inspired by jackals, partially by long-eared bats (their actual structure resembles more to those). The dragon is capable to echolocate in need. The backwards facing nostrils partly came off from another cheetaan universe race, the Shiriats, but they are quite reasonable on this creature who doesn't rely on scent. This structure protects them somewhat in flight, and by appropriately leading out air, they may also help keeping the field of vision clear in cold high-altitude weather (diverting the exhaled warm steam below the jaws, throwing it behind the head before it would rise).

Dragon personalities can vary wildly depending on how the brains settled in their roles. This is unlike human, the dragon frequently actually has multiple persons (typically three) within the body. If anything, it is probably the most like a Siamese twin with two heads. Depending on how the dragon matures, how the brains become sentient, there are several base dragon characters which could develop. On the north pole where the Nir and Xi lives, only various types of wise "guardian"s live, not all of those benevolent. Humankind only has reasonable chance to observe those benevolent ones which bond with one or more Nir or Xi. Of these, he may come to recognize three (or four) common characters:

The ancient wise Chinese dragon. Peaceful, serene dragons with a strong impression of otherworldly power beyond their natural immense capabilities. They typically keep distance, and enforce it, tending to have a bit haughty attitude. When moving, they are meticulous, planning their actions, considering their environment all the time. They respect life only killing for feeding themselves normally, and when they do, they are swift in their methods. This attitude doesn't stop them from utterly destroying their enemies, and when that happens, its dangerous because they do it intentionally and are throughout. They however may listen to reason. This character could develop from a dominant head brain, the other two becoming subordinate without own personalities.

The mild trickster. A rather playful merry character normally, preferring interaction and caressing, with a little bit unpredictable behavior. They require entertaining, and it is common they bond with more than one Nir or Xi. This character could develop from a dragon who first matured in head, but reached an equilibrium with three minds, after spending centuries on the north pole as a benevolent guardian. When facing a problem, they purposefully switch personality to let the one most proficient with it solve. Usually they let themselves being governed by the hip on the ground, the shoulder in the air (and so having a notably different character then), while the head either stays in the back planning, or interacts in need. They respect intelligent life by their nature, however when harmed, attacked, they can become impulse driven causing utter destruction, without any possibility to reason them to stop. The same time they are also about the only character which might form a friendship with a (short lived compared to them) human being.

The rare solitary independent mind. These are very rare due to that they were largely killed or their mind was destroyed in the war, and even when met, could be confused with the ancient Chinese character. There are actually two such characters, one being the shoulder dominant, the other being the three minded dragon maturing from the shoulder. Due to the shoulder's flight centric nature, preferring independence and freedom they had severe difficulties under human oppression, turning a lot of them feral as their mind couldn't bear the pressure. Those which remain keep distance if they even accept the presence of human beings.

These four characters are nearly the only which could become benevolent guardians bonding with a Nir or Xi. There are a few other rarities, but those usually are even reluctant towards other Tanis than who they are bonded with or are dangerously unpredictable (a few dragons truly exhibiting multiple personality disorder in particular).

The multi-personality trait is neither uncommon among the Xi and Nir, but much rarer and even if it happens, rather mild (they have two distinct brains capable to grow own mind, but they are more closely linked than those of the dragon).

When interacting with a mild trickster type dragon, about the only one with whom you as human really could, you may meet quite awkward and embarrassing situations relating to how they tick. Being open to those, trying to understand him is a key to make some lasting relationship. For a start, it is very useful to know how parts of their body relate with the brains and the minds within, understanding that touching and grooming among them is not merely treating a single being. These three minded dragons might appear very cat like in how meticulous they are cleaning themselves, however the main purpose is rather comforting, typically the head brain (as they are head matured) caressing the soft spots tied tight with the other two minds. It is particularly important to build up a good relation with the hip governing the dragon's bodily needs, massaging the belly, the hind legs, and the muscles of the tail. Fatal accidents relating these dragons are most often caused by neglecting the hip for whatever reasons.

Anyway, just mentioned for the fun of it, these Akri in the most important cheetaan universe stories rarely occur in any relationship with human not involving the utter destruction of one or another. Just the way things are.