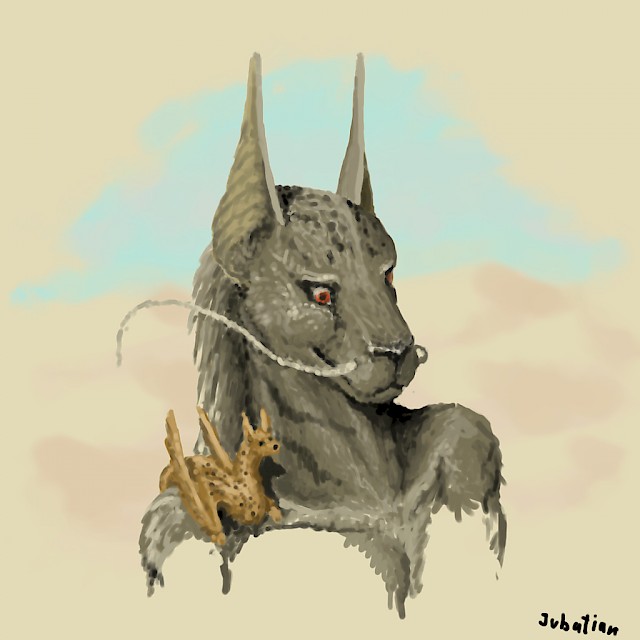 A Tani Xi (Wolf) with a small batbird.

He is one of the composition of three sentient races (shown here) identifying themselves the Tanis.

This might still not exactly be their final looks, although definitely approaching the idea. What is particularly new on him is the pattern, I rather imagine them just being dark, not pitch-black like I often portrayed them earlier. It just doesn't fit that well with their mostly quite warm homeworld. The pattern is a mix of spots and stripes, somewhat resembling to some of those observable on Akris (the large dragon-thing).

The small creature on his shoulder is a batbird, belonging to a broad class of diverse fauna covering ecological niches birds and flying insects occupy on Earth. They (like the Tanis themselves) are covered in feathers, however neither of them evolved to walk on its hind-legs like contemporary birds, it is speculated that the lower gravity combined with the much thicker and denser atmosphere of the planet had a significant role forming them in this manner. The largest of them have wingspans approaching four meters with a structure somewhat resembling to an odd mix of bats and birds, smaller ones often have the membrane and the fingers more or less missing, while the tiniest classes adapted simplified, somewhat insect-like features.

What about the Akri then with its often more than fifteen meters wingspan? The Akri actually is not a true batbird, it seems like they are an odd case of parallel evolution, however with all the weird things going on with the Tanis it might be impossible to ascertain their exact origins. The three Tani races are genderless and by current knowledge, apparently ageless, however their construction correlates strongly with the rest of the native fauna that they are believed to be native to their world.