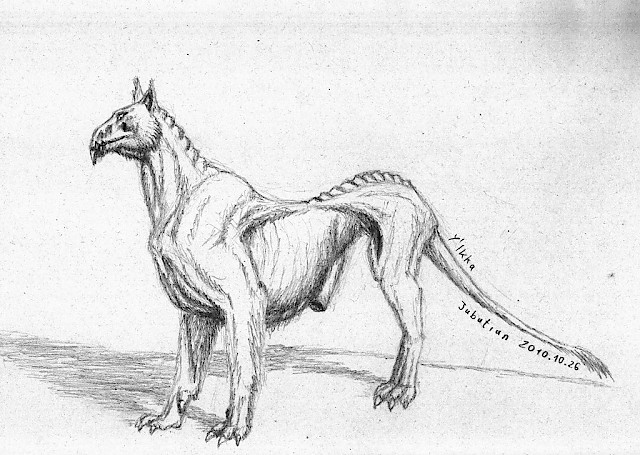 One of the intelligent creatures occurring in the story of Cheetaan Legacy. This creature was born from some experimental sketches I did in the Bükk mountains, as I remember somewhere up the mountainside looking down far to one of the largest springs in the region. Could a three legged anatomy work? Later after some studies on it I ended up with that it could. It is not really probable, but theoretically it works, for the most important part these creatures with proper balancing can move around without trouble.

These beasts in the story would hold their heads well above that of a tall human, and being carnivorous and reasonably intelligent (Even having some rudimentary language) they are also quite dangerous. For their sturdy and heavy build they may easily push even a car down from the road which fits their impact-based hunting style just too well.

Human for one part wanted to get rid of these, but it turned out it would only be possible by largely destroying their jungle habitats which for the dangers and probable effects on the climate did never quite happen, at least not until just too many radical environmentalists showed up. An other factor against the destruction of the race was their mostly illegal but widespread use as heavyweight armored guards. Thanks to these the race slowly spread somewhat out becoming one of the more characteristics races of the region.