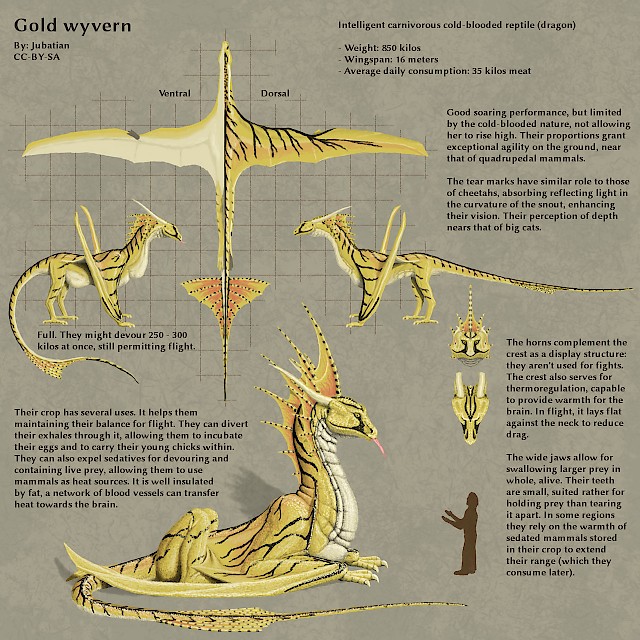 Yet another wyvern design aiming for realistic capability of flight and a dragonlike appearance, a controversial beauty. She has no direct relation to the gold wyverns of Outbreak to the Sky, although those were one inspiration source to design her.

Her wing structure mostly follows that of the wyvern taur, with pneumatic sacs which deflate when the wing is furled up.

Her forelimbs and hind limbs are of similar length, so unlike usual wyverns, she doesn't walk around crouched, rather perfectly upright. In this she resembles my older feathered headbanging dragon, but that had largely inferior design regarding flight (and was too damn large for my tastes). For a realistic, agile quadrupedal wyvern, this is about the only possible coarse anatomy.

Her facial expression resembles that of a cheetah due to the tear marks, serving the same role like for the feline.

The skin is largely borrowed from tegus, they have that beautiful glimmering scaly surface which I like in reptiles (why just about everyone dresses dragons from toe to wingtip in pangolin scales, I wonder...). Unlike snakes, this type of skin doesn't stretch, so the reptile has to have enough loose to accommodate his movements and feeding.

She is cold-blooded, although with some tweaks. Contrary to reptiles, her fat is within the skin, insulating her better (but that also means a plump wyvern of this specie might have her neck and belly sag, no longer able to contract the excess skin). Her circulation would also adapt, to contain heat generated by her muscles in flight in her torso, allowing her limbs to cool down just so warm which is necessary for their health. She may keep herself going by active flight in cold environments for a while.

A bit of morbid tendency for voring included. In a story this might provide for some creepy and controversial stuff.

I imagined her often gulping down live prey, not even caring for killing "properly". However, for her own protection, she sedates them so they don't feel pain and remain calm (so won't trash around and injure her innards). The use of this is that they would use live mammals stored in their crop for their warmth to extend their range into colder regions.

She could also use this sedative on her chick (contained in the crop) in need, and also on other wyverns in pain (by swallowing their snout).

Ending up within such a wyvern is sure something horribly creepy. There is air inside and her saliva to drink (this is intentional to keep prey alive there, also relied upon by their chicks), and the place usually has a convenient temperature (well insulated, but her circulation takes away the excess heat for her use). She is also instinctively aware of having something alive in the crop, taking care of not causing it any accidental harm. However there is no way out, two or three days, and she would swallow you to sate her hunger, vacating the crop for another prey.

Of course they are intelligent enough to strip a human bare before gulping it down.

Well, for me she looks really compelling. The kind of thing that if I imagined the ubiquitous damsel in distress scenario, a princess locked away in the dragon's keep, I would wonder whether the knight wouldn't change his mind upon seeing this dragon. Whether he would be better of trying to abduct the dragon instead...

Anyway, she is something which I doubt wouldn't stir emotions in people witnessing her for real, something beyond the "big dangerous dragon" thing. The kind of thing when one just forgets to run away. A tribal village's people I believe would outright see her a god descending from the sky, and rather try to worship her (especially if she allowed them realizing she wasn't a completely feral beast).

Probably just too damn beautiful for those kind of stories I would want to write... Well, maybe try different kind of stories for her. It would be something wicked if such a beast existed (She might want to consume you, possibly even in a slow, horrendous manner, but that majesty! That would fit for an emperor!).

(Note: I don't refer my skill at drawing with that, rather this imaginary dragon's visual impression :) )