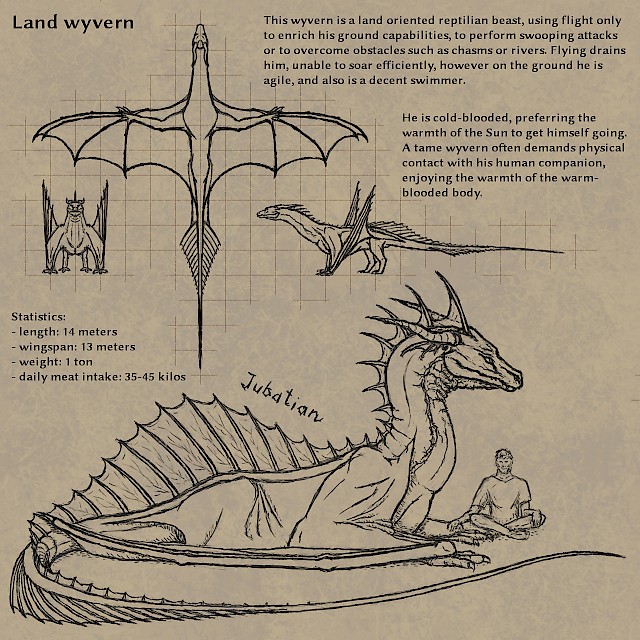 Yet another dragon / wyvern refsheet.

The base ideas for this one came from the story The Contact, a land oriented wyvern which by appearance might even somewhat pass for a western dragon.

"Somewhat pass", well, he has short, broad wings, which allows his forelimbs to be short, thus adapting a more conventional posture on the ground, somewhat resembling monitor lizards or quadrupedal dinos. He can be more versatile on the ground, but with a trade-off at flight: he can't really soar, requiring costly active flapping to stay up. I fleshed out the concept into creating a land oriented dragon who only uses flight to enrich his possibilities, and to assist his hunts. He is not even very light, rather aiming for robustness on ground than aerial performance.

His habitat on Earth would be the savanna, wide open areas where he can hunt, also fitting for his cold-blooded nature, having sufficient temperatures the entire year to keep him active. Putting him in a fantasy world allows humankind to develop in the colder regions without their hindrance (no matter if they were any intelligent unless they devised means to keep themselves warm in the cold months), while this limitation also could be sources for interesting ideas in a story.

I like this size for dragons or wyverns, I think just right. They are still too powerful for single-man medieval weapons, are large enough to carry humans and equipment (if they are tame or intelligent and benevolent), and their reptilian mouth is also big enough to easily gulp down people in whole if playing a malicious beast.

So again something slightly different than before to enrich my collection of wyvern refsheets.