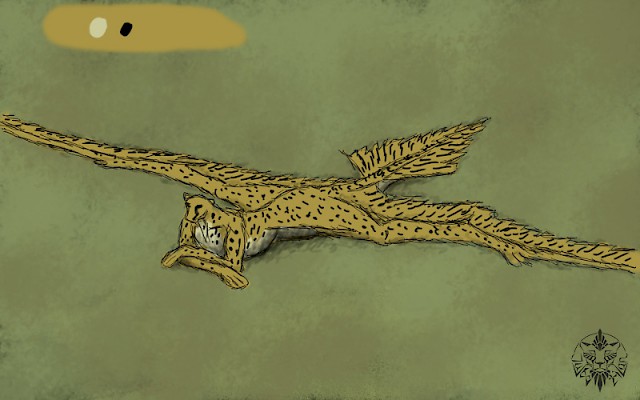 Experimental one hour sketching, what I can do in a short time.

Also exploring an interesting construct, a leg-winged creature, roughly based on this dinosaur (Sharovipteryx miribilis).

Of course in the previous days I did several exploratory sketches to get familiar with the proportions and general shape of this being.

I didn't do such before, although did some related experimenting with comic-like art. What was particularly new is picking the colors (damn, and I got them somewhat right!), and using some more creative brush selection to mimic a few things.

This, I think is a plausible flying being, although a quite unlikely path of evolution. The reason is that a feral beast have more use of the hind legs, so in competition the traditional bird form would likely win over. However this creature is easier to balance for flight, easily having the center of mass before the load-bearing surface which is a great advantage. The hip construction is possible if starting off from a reptile hip, where the ischium and pubis bones may evolve into a suitable keel. The construction in general is the most beneficial for intelligent, tool-using creatures, retaining the complete freedom of the arms (unless they would use them as elevator surfaces instead of having a tail).

The resulting strange anthropomorphic being has some interesting characteristics. His form strongly suggests a woman with the apparently large hip, pronounced "stomach" (which in reality would be formed of the flight muscles anchoring on the hip-keel), also likely having a considerable breast for capacious lungs.

I simply got to love this concept as soon as I got some sketches done. Their shape is intriguing and unique, yet plausible, also having a peculiar charm, partly for their womanlike traits.

The Cheetaan universe has an avian being, I will likely use this form to flesh them out (although likely not as a cheetah) instead of the "regular" anthropomorphic avian with arm-wings I imagined before.