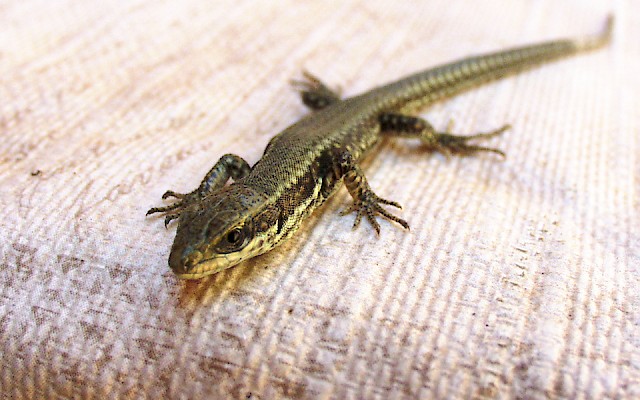 Duh. This lizard was malfunctioning. It didn't run away :p

Just a tiny juvenile common wall lizard (Podarcis muralis), about six centimeters in length (including tail). It was resting in the shade on an outdoor table, and apart from breathing and occasionally turning its head a bit, it didn't do anything for about a quarter hour, allowing surprisingly good photos for the size. Then slowly it became "operational", first turning around, a half minute later skittering away a bit, then suddenly darting to the edge to fall off, and running away on the sidewalk. I don't know how it even ended up on the top of that table lacking any apparent damage (apart from a finger of the left hind foot possibly broken).

Taken with my Olympus C2500L, a 1999 digital camera. Surprisingly its picture quality is still better than that of a decade newer Fujifilm one which I bought some months ago and set aside disappointed.