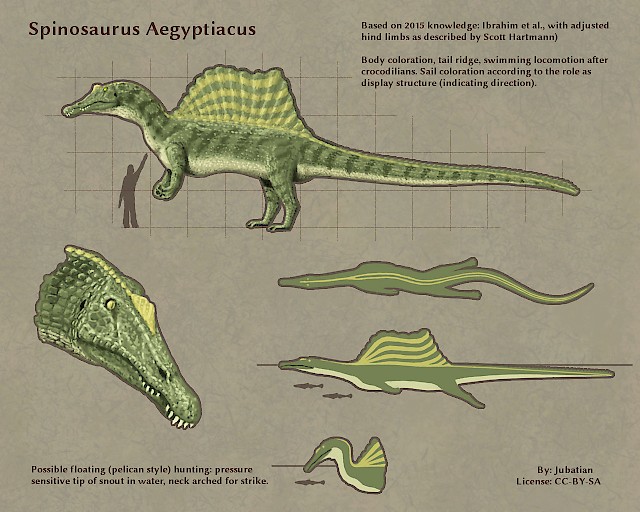 Spinosaurus Aegyptiacus reconstruction (at least an attempt at it), as of 2015 knowledge.

I also looked at the 1912 Stromer find and reconstruction (can be found here for example) which notably places the tallest neural spine at the same location as modern reconstructions. I took it as a reassurement since Ernst Stromer had those bones first-hand (which got lost later in WW2; some reconstructions before 2014 assumed it being part of the tail).

An older (2011) post by Jaime A. Headden: A fistful of Spinosaurus was also something I believe worthy to read and understand, outlining the pitfalls of attempting to reconstruct an animal from the diverse fragments turning up. The today's Spinosaurus may just still not be "the" Spinosaurus.

Own theories and ramblings:

Obviously we know only the skeleton of this animal (or at least parts of it, such as it still looks like there are no definite Spino forelimbs found). I took the liberty of portraying him as a scaly (crocodilian) beast, as many large theropods lacked feathers. A notable proven example is the Carnotaurus. I just felt it more fitting, but of course later it might turn out the Spino had feathers.

My interpretation of the sail uses the assumption that it was a display structure (the bones suggest this). It is a somewhat asymmetrical trapezoid, I took that a bit farther applying a coloration which even better indicates the direction of the animal, making it more useful in this role. The Spino likely didn't hunt at all for ground animals, the sail, and his wimpy hind legs making him completely unsuitable for that, so it doesn't really matter how "ridiculous" the thing is. A possible use may be an indication to the young (if they cared and even if they didn't for their chick) both that where is an adult Spino, and where the "dangerous" end is. They likely weren't very bright, so it could have been an useful measure to prevent cannibalism (even accidental one: the Spino might have not even cared what it gulped down). Of course it could also indicate maturity, gender, acceptance, and many other things. It might also have helped them avoid fights (which in their case was probably more dangerous than among crocs which can be all well with one or two feet lost as it happens).

For locomotion I assumed croc style swimming, using the tail extensively. The hind feet appears very small, rather seeming like something useful for steering, like as far as I see, the tail vertebrae were similar to those of crocs, so might have had similar musculature and use. Quite efficient.

That's all. So a bit of fun with paleoart and related research. The Spino is definitely an interesting and unique dinosaur, not for just the size.