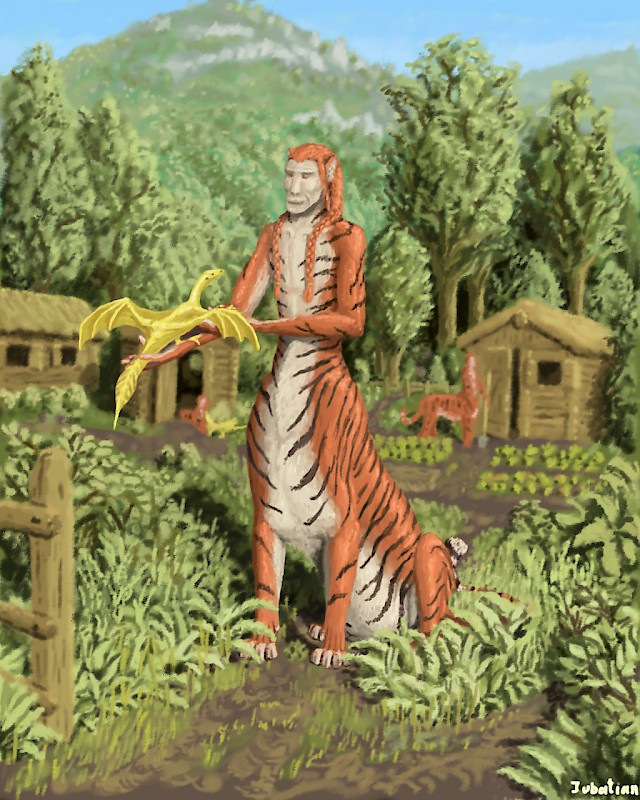 A peaceful tiger taur village in the forest. This was painted by a rather random idea, by some sketch of a plump tiger taur I stumbled upon. A pleasant, secluded forestry region where these creatures may thrive.

Anyway, while I am not that much into taurs, I find the idea fun enough, and they don't defy the laws of physics either. Such a six-limbed creature could exist, if someone wanted to go really far trying to get it as plausible as possible, the anatomy and motion of giraffes could provide a good base idea.

The little golden dragon or fire lizard is a bit tricky, it is not the conventional western dragon anatomy, rather one with the wings muscles anchoring to a reptilian pelvis. They go well along with the taurs as another six-limbed creature.

Regarding the fat distribution, I prefer them this way, to have the quadrupedal body taking all the pudge, it makes sense as it does better for their balance. He doesn't have second stomach, I imagine the torso rather being more like a neck, although with lungs and heart to provide oxygen-rich blood to the brain of these intelligent beings.

It is interesting to try to imagine how they feel about their body. The circulation being somewhat detached, I can imagine them being somewhat detached themselves from their quadrupedal half as they may even be in a different state of activity. Like the body sleeping, maybe after a meal, while them still active, reading, thinking, or talking with each other laying on their sides.

The foliage could definitely improve, just how to get lots of it done in a finite time without going cheap and duplicating things. Otherwise I like the end result, I think I managed to get rather okay three dimensional impression with this. Focus at it with one eye closed, at least for me it works, and was even a bit disorienting during painting.