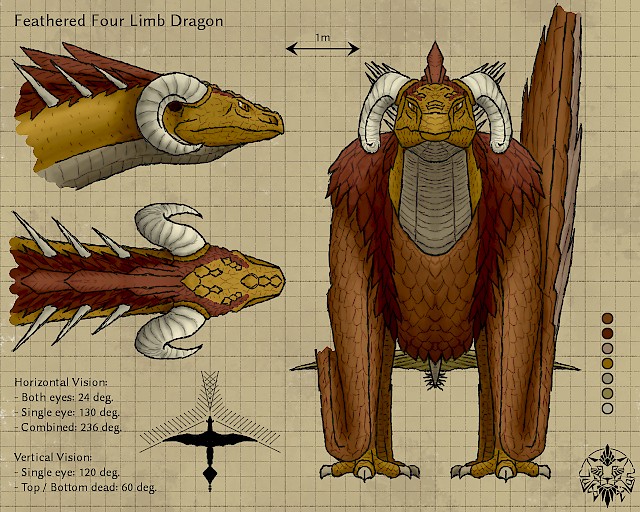 Continuing the design of a four limbed dragon. Here I used first-angle projection to shape the head, then added the whole body to the front view. Note the parallel projection which may look odd to someone expecting perspective.

For a comparison, below is the other reference sheet of the same dragon: 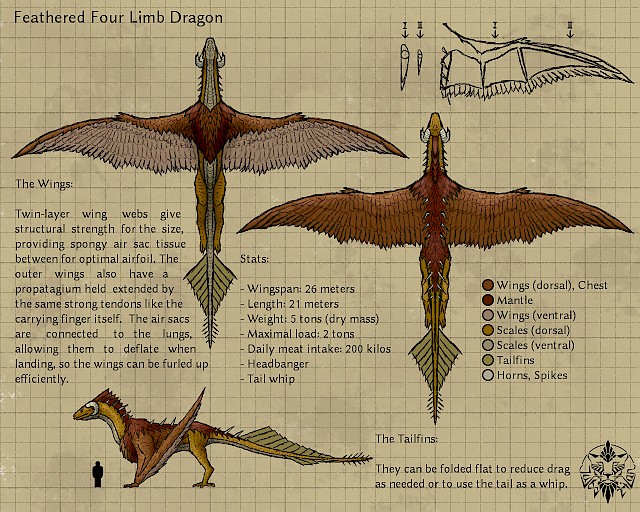 The dragon's head was meant to be shaped as an ordinary reptile's, using monitor lizards and tegus as reference. A shortcoming of this head structure is how the eyes are located on the sides, making the creature having somewhat poor forwards vision. This is a problem for a flying design where he would prefer to hold his head straight to adapt the aerodynamically most favorable position. So little by little I pulled the eyes forth until arriving to a result which still looked reptilian enough, yet offered him adequate vision.

What came out looks interesting to think about, imagining oneself in his place, what he would see. By how I located the eyes, he would definitely see his own snout, obscuring his vision somewhat like the situation of a steam engine's driver. However he has a reasonable field of binocular vision, allowing for combining the image of the two eyes. Probably he would only use the capability of three dimensional vision at mid distances (maybe between about five meters and hundred). At too short distances the snout would hinder him focusing both eyes on the same object (nearer than about 150 centimeters this capability completely wanes due to the small blind area before the nose), at too large distances, like for any creature, the capability deteriorates.

Otherwise in normal flying position he doesn't see his own body, neither the tips of his horns or the wings due to his long neck, giving him quite wide unobscured field of vision (it is interesting to think about pigeons, for example, how their entire body would almost always show in their field as they see even backwards).

It would have been possible to design differently, but I wanted him to use his head as a ram, which requires the eyes to be seated deeper, protected by bony protrusions.

Some additional elements of the wing-design are visible here. Mostly I took ideas from Pterosaurs, particularly how their wing-hands were constructed, relying on a massive extensor tendon. In normal flight position so he has the lower arms in the same orientation like when walking, the clawed fingers keeping facing downwards under the extensor.

The shoulder may look strange: it is simply not the same as a quadruped animal's which may be expected for a dragon, rather like that of a bird or bat or even humanoid. These all have somewhat similar construction there, required for proper placement at flight. Typical crouching wyvern designs are similar, but look different due to their natural posture on the ground. The shoulder is also wider than the hips (2.4 meters versus 2), required for the chest to fit with the large flight muscles.

I plan these beasts to be intelligent in the story I wish to use them. Their robust construction doesn't much suggest that, however in such a large skull a sufficiently sized brain fits for thinking. I don't really think brain size versus body mass has too much importance: while it may have a little, it could be negligible compared to the sheer increase in volume by simple upscaling. After all, people neither become less intelligent when operating large machinery (eh... could be debatable though! :) ). In real world intelligence might rather depend on whether it is a beneficial evolution or not, and maybe extreme results only come when some creature arrives at the border of establishing culture (communication, learned language), by which they could become more adept in survival than other races not having this trait.

Of course some world-design was already put in this one, I mean the story I imagined needing this large dragon thing, which includes how their culture forms, their relations to each other and mankind. Controversial, I like that way. Maybe some time I can start building this one, probably as a comic (in general, I experiment for that purpose with these line-arts and coloring).