There are many places in Hungary where in the past narrow gauge railroads were operating, a lot of these today are just memories leaving behind just a few pieces of rails here and there embedded in asphalt, and the use of parts in fences and buildings. There are however a few which closed down more recently, and so the tracks are still mostly intact. One of these are the 760mm gauge industrial tracks of the hemp rope factory of Szegvár, measuring about 10 kilometres total length and lots of turnouts for an interesting layout to serve the factory. In August I was there helping in the work of keeping it in operational order, and in the 20th August (Hungary's national celebration) in the passenger operation. 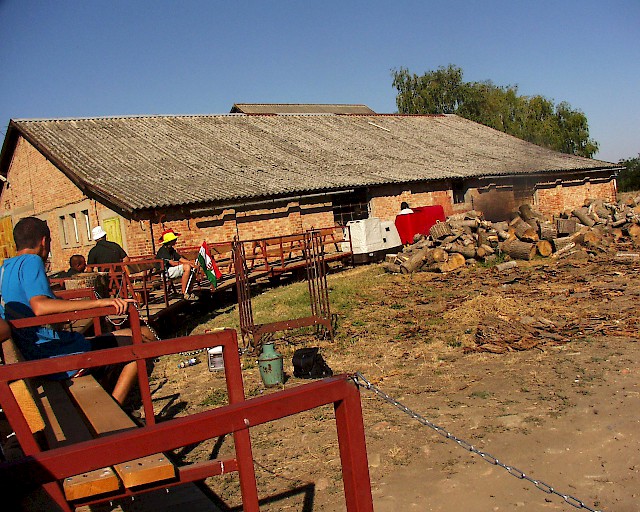 Go, go, hooray! Let's start the day, the first train of the 20th about to leave!

The tracks were originally built to serve the hemp rope factory of Szegvár which slowly decayed and eventually closed down in the past ten years, it's production (whatever was left of it) was moved somewhere near Szeged. I was lucky to see some of the machines in operation last year. A short detour: why on the Earth would one still produce ropes of hemp in the age of synthetics? The most important advantage of these is that they don't gather static electricity like nylon, so can be used in environments where that's a disadvantage (like near explosives). These ropes are also told to be still used on sailing ships. 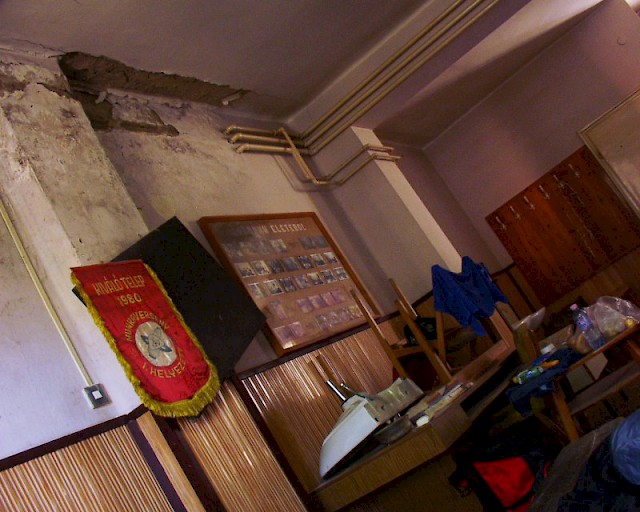 Relics from the past, before the system change

The factory did not just produce the rope, it grew the hemp in place. The narrow gauge tracks primarily served exactly for this: many run across the fields where hemp was grown primarily to collect it, and bring in the processing facilities. An important part of the process was soaking the hemp, for this the factory relied on the widely available thermal water of our country. Why thermal water? In the past the continuous high volume production was a priority, so the work had to start on the fifteenth March even if the weather was like the hell would freeze over. So they took the advantage of our underground resource, and let the warm thermal water come up to make this a possibility. The wells were so-called positive, that is, the water comes up on it's own, so this way even today there are filled pools of this warm water in the factory area. 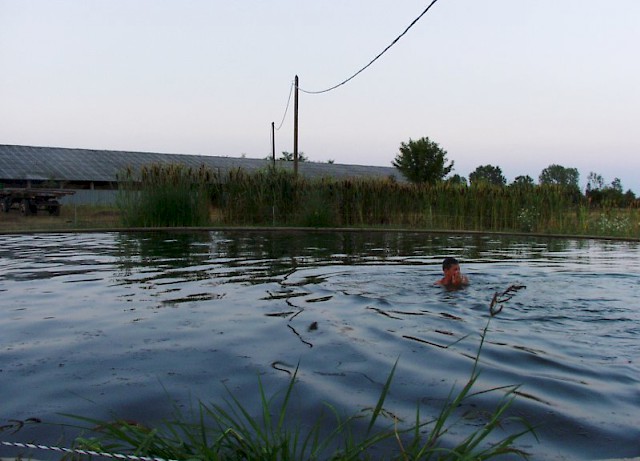 One of the thermal pools around the site

These days after the factory ceased to be, everything is just rusting there. Old buildings, some old equipment, only a guard and a shepherd are there where once many people worked from dawn till dusk and dusk till dawn. All would certainly just rot away or would be collected for the price of raw materials (this is a common fate of abandoned rail roads here: many are torn up sometimes illegally for the price of the metal as there is no proper control on junk metal trade) if it weren't for those people who care.

It started sometime three or so years ago when local rail lovers noticed the situation there. Ever since then they were trying to negotiate with the local authorities and the owner of the factory to keep this piece of the past in functional order to make it possible to give the trains a go. First the tracks were transferred to local property as an industrial heritage, and recently a somewhat permanent permission was acquired for passenger service on them.

But that's only a part of the story. Bureaucracy is a though stuff, but even meanwhile without anything happening on the field, ageing is at work. In the past three years there was passenger service around every 20th of August with considerable interest (sometimes the available engines and carriages just weren't enough to serve the needs), but even with this little, the thin tracks are literally rotting away, and occasionally even some thefts happen. To make the passenger operation safe, some serious work has to be done. 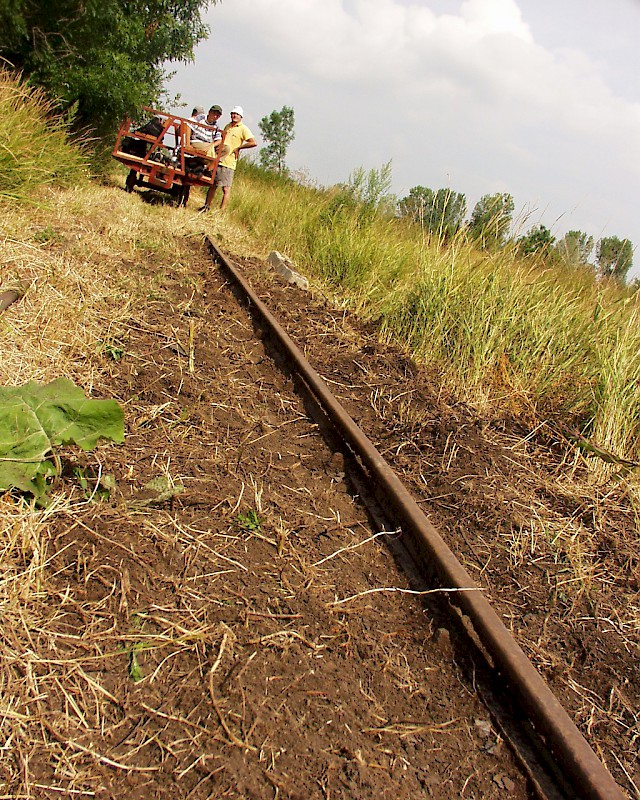 At the worst sections, one could see through the tracks

So far every year before 20th August there was a week of construction camp for these works. This was where I went to help, and that's how these photos were made in some spare times (see how good is to just linger around with a camera while the party is at work in 35 degrees Celsius? :D).

It is hard, but also interesting to work out there. It would be just too easy to simply go out with a set of concrete sleepers and chunks of replacement rails to fix up some problems. First, of course the problems themselves have to be identified: on such a small rail road where nothing goes above like ten kilometres per hour, these are different. Track is not straight and wobbles around like a drunken snake? Absolutely no problem as long as the gauge is between at about 750 - 780 millimetres and the rails are held firmly! The real problem is once when the wooden sleepers (or at least the place where they were...) rot out or the wood fillings of some concrete sleepers decay and let the rail loose. Even the slowest train will derail there falling between the rails no longer held in place. Most of the work involves fixing up these. The worse situation is when the metal itself rots apart which for the light construction and old materials is unpleasantly common in some sections. 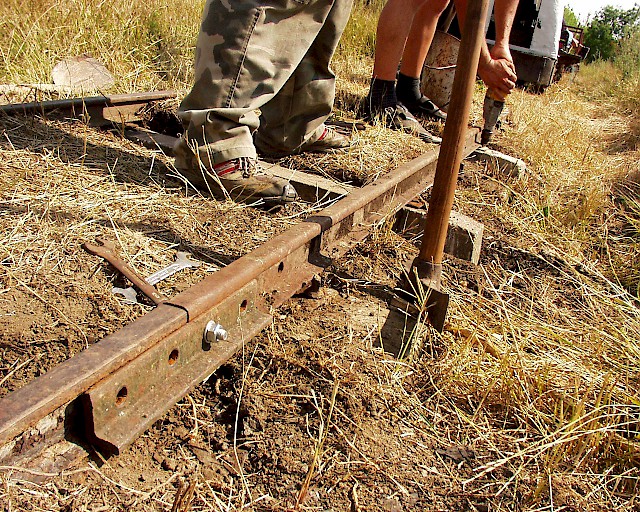 That's good though that we have some replacement materials, although it is also work to extract those. Find some usable sleepers (which didn't already broke apart) from a pile of junk, pickaxe some smaller track utilities (screws, rail fastening pieces, fishplates) out of the ground from around there, sort these out, throw all on the work train, and let's go. Weird, but fun. 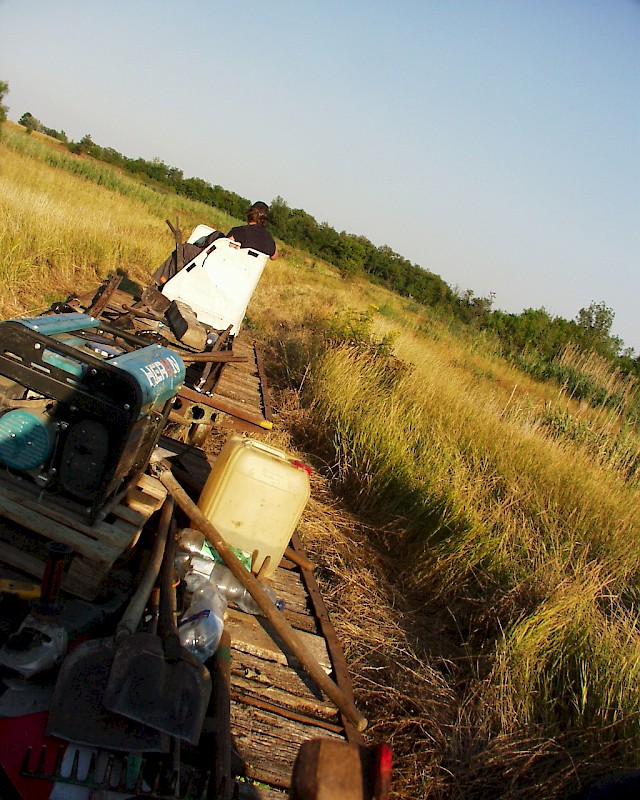 Going home on our work train

The small engines by the way are not the property of the factory: here there weren't any remaining (they pulled around the carriages with tractors before). Strange, but yes, one of those who come here every summer working on this rail system has a nice assortment of narrow gauge stuff in his backyard like more than a hundred meters of tracks laid down, and also some such engines! So that's him who lends these for the service - more on them may be found on their site.

And well, for some final words of this article, it is definitely good to see there are people in this country who care, and hope the best for this little rail operation! Hopefully they will be up and running next summer too, and yes, if it will be so, I definitely hope I will be there for some useful work! :) 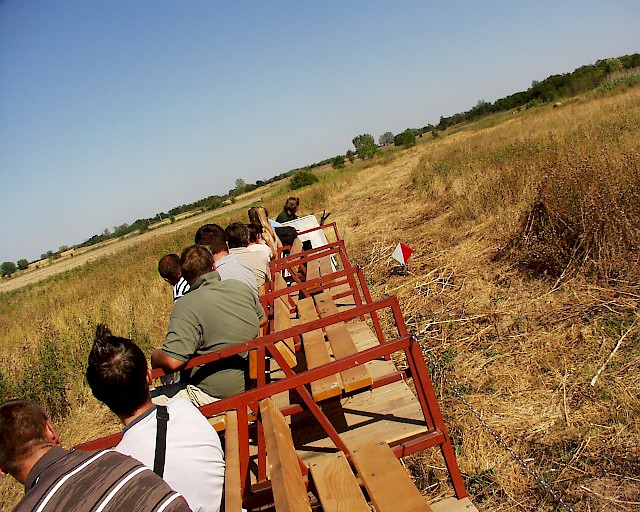 The 20th: passenger service is rolling on the tracks!