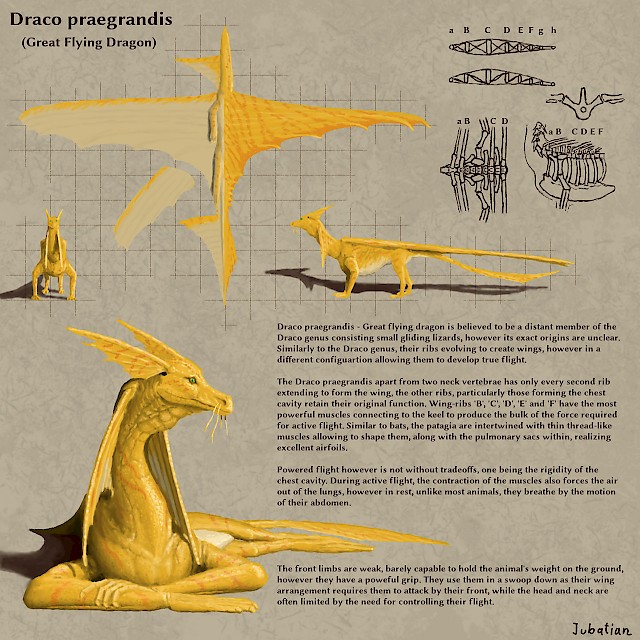 Huh, is this a six limb dragon? Which flies?

So does he have six limbs then? And how?

Nope, he doesn't have six limbs. The trick is that the wings are ribs, a design which exists in nature: the Draco Lizard, although quite far from the capability of actual powered flight for a variety of reasons. From the realm of fantasy, he could be a manifestation of classic Dungeons and Dragons brass or gold dragon, who have this sort of structure.

Let's explore the design a bit then.

Why it might even work for the first place? Compared to the traditional Western dragon, he has major wing attachments to the keel both in front of and behind the forelimbs, which is something impossible when designing with wing-arms. This should allow to build up the proper constructions for all types of wing movements necessary for flight. I also used lizard-like front limb attachment which appears to be easier to embed in that muscle-heavy front.

Originally I desired something more like a lizard, low on the ground, however it proved to be impractical. The reason is that somehow he has to take off, which take-off for this creature would resemble to that of an albatross, the wing surfaces need to be roughly horizontal (angled slightly for lift). The hip needs to be high enough so shrubs and such won't impede his run, of course running using his hind legs only. This could somewhat look like the motion of a spinosaurus.

The wings are unlike any other real world creature's which evolved active flight, so are the motions. The most notable difference is diving, where this dragon has to sweep the wings back, getting himself front-heavy. What he absolutely can not do is the typical hunting act of most birds of prey as he has no means to restore his centre of balance quick enough.

The fins on the neck and the front limbs become essential at this phase: the fins allow him to control his flight like a canard aircraft, while the long front limbs with strong hands can grab the prey. Then during gentle soaring, he reverts to an ordinary configuration, using the tail when needed, so he can consume whatever he picked up even in flight.

Roughly that's it for flight itself.

However another problem surfaces with this design: Since the attachment points of the muscles spread along the entire length of the torso, the forces exerted during active flight also pretty much cover the entire length. The entire chest cavity has to be rather rigid to hold up against this, however that impedes normal breathing.

So I imagine him using a different mechanism moving air through the lungs by pumping the abdomen, muscles for both push and pull may well exist, although pull is not strictly essential if he relied on the weight of intestines, but that would quite limit the postures in which he wouldn't struggle for air.

Either way, it would look a bit odd that instead of his chest cavity, the abdomen would rise and fall as he breathes.

Well, the creature has hands, the design simply calls for it, although not necessary true hands, but something especially to grab prey with when swooping. Anyway, I just like to imagine these big beasts at least somewhat intelligent, so please bear with me.

As reptiles, not covered with protective fur I can imagine them living on the savannah regions, even venturing into deserts as far as some prey can be found to sustain themselves.

They may be active herders, they could build up even some rudimentary civilization and culture in which tending for and following the herds play a central role. With their hands, they could even create rudimentary tools or alter their environment in their attempt to keep their livestock healthy.

Fire with dragons could be an interesting thing. I generally see the fire breath a bit contradictory, the creature evolving it easily earning its own Darwin award in a quick and rather spectacular manner, so improbable. However with these, a different sort of fire "breath" may evolve given their prolonged existence in their rudimentary culture.

In colder areas, they need the fire to survive and keep themselves active, so they have to know the means to create it. Creating fire however can be tricky and difficult depending on the circumstances. They can not quite take it with themselves on their flights (like early humans often did), however if they got accustomed to carrying flammable material in their mouth (like something prepared from animal fat), adding a lot of generations, they may evolve towards actually being able to excrete flammable saliva, and eventually might even come to be able to ignite it (either by a spark or chemical process).

So the fire "breath" of this dragon could be something happening as a consequence of having some rudimentary intelligence, for the purpose of making them able to start a fire to give them warmth.

Juts thought it interesting, due to their odd breathing, pumping air by the movement of their abdomen.

Like reptiles, they may prefer to gorge themselves, consuming large prey entirely in one go. Normally even when resting on their stomach, they have no problem breathing as the reptilian hip construction with the ischium and pubis and all the musculature on these keeps their intestines still somewhat suspended, so even their weight is sufficient for their inhales. As they start to fill themselves however breathing becomes more difficult.

They might so shift their posture to lay on their side or possibly even raising their hind while feeding to get themselves air, preferences vary, but in the end, after devouring something particularly big, they are just uncomfortable, standing they struggle to exhale, laying they struggle to inhale, sitting is okay, but inconvenient due to their wings.

How they remedy this is typically digging a hole in the sand, sufficiently deep to let their belly resting comfortably, neither suspended, nor compressed while they lay on it to sprawl out for a fine long sleep after their meal.

Odd, and I guess at least somewhat interesting, quite a strange design in overall to add to my bestiary.