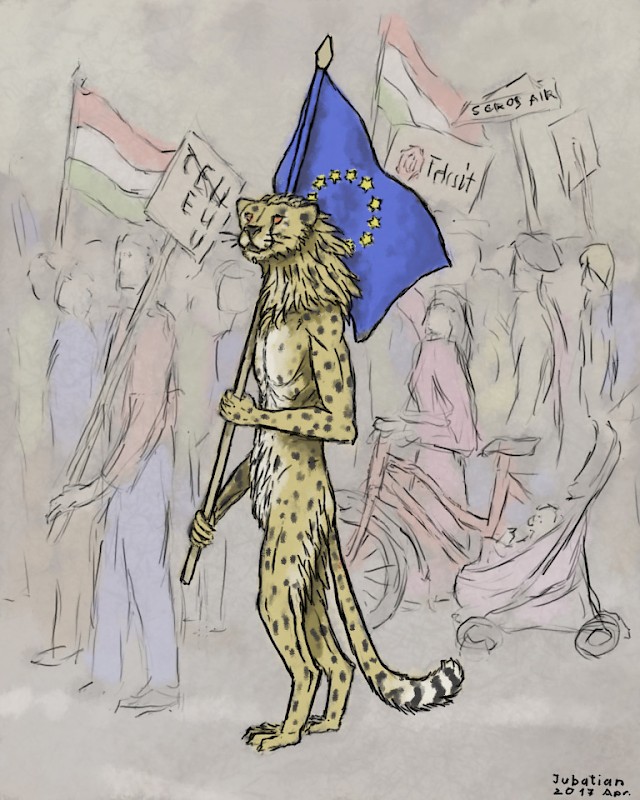 We are European. A quick image sketched up portraying myself in the protests of April, 2017, Hungary, protesting against the actions of the government leading Hungary out of Europe and humanity itself, back to the dark ages. An now I have a flag of the European Union!

Most of the signs used on the protests are of course Hungarian, and several wouldn't be quite understandable for the international observer, I added three which might be with some explanation.

The CEU-EU-U sign refers to the passed law crippling the CEU (Central European University), the EU and U below refers to the European Union, and You, as in the future to-do list of the government. The "Felcsut" one with a Stop sign (actually an AdBlock logo) refers to the propaganda flooding the country, "Stop Brussels", that is, the European lawmaking's effect on Hungarian land, which use the same (AdBlock stop sign) logo. Felcsut is the hometown of Viktor Orban, the prime minister, which town received a stadium so large that it could seat the entire population of that town, and a narrow gauge railroad, two of the most outrageous examples on how they use the money of the taxpayers for their own personal good. The "Soros Air" plane refers to a news item surfaced on the governmental channels (which are all practically owned by the party) that George Soros was bringing protesters here from abroad by planes.

These protests are peaceful, attended by all ages, we marched on the streets of Budapest (blocking traffic) shouting and chanting, hoping for a change, to keep with Europe.