I wandered around somewhat aimlessly on Youtube recently, and happened to stumble upon something exceptional, something which I wouldn't expect to exists. I like much fantasy creatures, especially dragons, and here I happened to find three very good pieces of animated short movies featuring them! Not even just at CGI, these even offer quite original ideas, so all in all, they definitely worth some attention - and not even just such a limited-time attention like typical shorts. 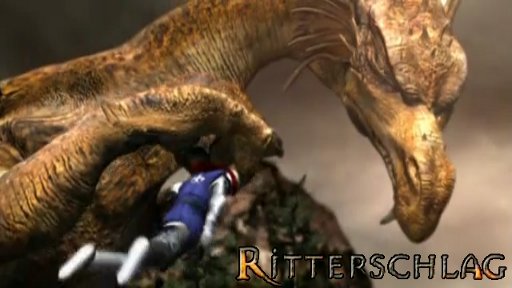 That much for this Knight

So let's dwell in some dragon - awesomeness, stating at the funny department. This CGI movie is also the shortest and oldest one (dated to 2003) of the three yet it still offers considerable amount fun. Ritterschlag is the German term for accolade, the conferring of knighthood. So knights, and dragons, what a lousy typical setting. But wait, just let it start unfolding! So our damsel in distress is in the little cage like a canary, captured by the big evil dragon(s), and then our brave knight enters on his steed to charge down the huge beast! Three - two - one, fire test, hot, good, go, BURN! One came, one went, or better, flew away, and the little guy also learned a nice lesson on how to treat those pesky tinned-cans-on-a-horse.

That's mostly all of it, yet I won't shoot the end, just watch it for some good laughs. The graphics is very neat CGI for it's age, it certainly still stands up quite well, so it's an all fine entertainment until it lasts!

Sintel with the young Scales as she called the little dragon

This pretty long offer came from Blender Foundation with a good running length of no less than fifteen minutes. It is a very recent movie released in 2010, so you can expect very decent visuals in it making it in this term one of the best independent animations to date. It revolves around the story and life of a girl (Sintel) who when young, found an injured dragon hatchling fell on the city roofs. She nurses it back to health, and as the film goes, teaches it, but suddenly the kind of idyllic setting is cut short by a matured dragon who entering the scene abducts the little one. Sintel after this sets on to a long journey to the home of dragons hoping she could find her little friend...

The whole movie feels very well composed and shows very original ideas. I like the most the ending part, that how they shown the sudden realization of an immerse time passed away, which I think is probably one of the most innovative touches of this short film.

For a little interesting experience of mine, the initial setting with the snowy mountains at first reminded to me like "Hey, isn't this Elevated made in a movie?" - Elevated is a stunning 4Kb demo.

I can only recommend this one, it gives both visually and story-wise a massive experience!

The weird: Reversal of the Heart 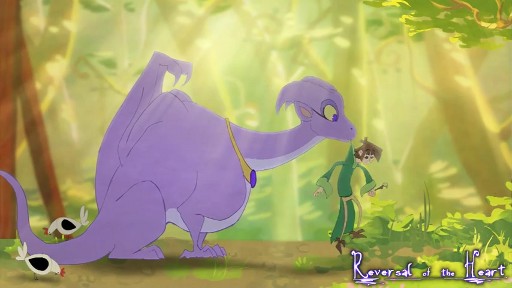 As the movie description goes this one was presented as a senior thesis in 2011 by it' author, Carolyn Chrisman. Huh, what? I mean "just" a senior thesis as this animated film certainly packs much much more than what probably the most picky film academy would gulp down as a thesis.

Let's put aside this little rambling, and look at this masterpiece a bit more closely. First, it is not CGI, at least not the three dimensional thing. For style, I would say it probably most closely resembles to how animes are usually drawn, although that probably only goes for the overall glimpse or probably technique, as the characters themselves have their own original art style. It is hard to set it anywhere: It uses large flat surfaces, mostly simplistic backgrounds like the usual animes or older lower budget cartoons, but the realization, the animations are very smooth and coherent which again would remind me to animes and would certainly set this piece miles away from any cheap low quality Saturday shows. Well, probably it's only comparable in artistic style to some other independent animated features where similar techniques with the heavy assistance of two dimensional computer drawing tools (This case Adobe products) are used.

So long on the visuals while the way more important point here is the actual story. In short summary, it is weird. Really weird. Not in the messed up sense by utilizing heavily twisted timeline or by relying on very abstract settings, in this department it is actually very clean and straightforward. The fine point is how it builds up it's mechanic, the innovative storyline and the ideas used alongside. Probably the only part what may be regarded typical is that it again makes a twist on the knight, dragon and damsel triumvirate, but these pretty much end there right at the beginning. Well, the knight is there, and really, a dragon is slain, but to where it goes on after?

With it's thirteen minutes of runtime this short movie certainly packs far more than what would conveniently fit in there a little crying out for a quality full length piece, but all in all, although probably a bit dense, but is extremely well composed, really worth some good attention!

So we have these three very decent pieces of independent animations, all packing some really original and innovative story ideas. Sometimes these (not only this three of course) makes me really think. If in a low budget such an awesome piece can be created, what could be possible if given the resources of a true full length CGI movie?

Let's just look at some (with dragons, again).

An old one from 1996 is Dragonheart, with probably the first really good-looking dragon. Acceptable, I say, but lacks a few things, most notably I think the story is just "eh". Nothing terribly bad there, it goes well, but nothing shiny innovative either, and at a few parts it is just overly simplified. The latter two of these independent movies certainly deal much better with this department (Especially the last: I like that much more how The reversal of the Heart made a story revolving around the dragon's heart and soul than what the authors of Dragonheart did).

In 2001 (Wow, it's already more than ten years!) we had Shrek. Well, probably that's about the only one which I think can compete with these in story ideas. That original Shrek was certainly very very innovative (including it's she-dragon), I liked the ideas used in that movie much. In short, I can say at least there certainly are large studios which can produce some quality stuff, so there is a hope that these independent authors can get somewhere where their ideas might really get to shine one day in high quality animated films.

And at last with dragons for a glimpse I also mention Avatar. Just that I had seen that one. Visually certainly impressive, but... From where the hell they fished out their scripts?! That movie is a fine example on that without a decent story it's nothing. Well, the base ideas were good, but the execution? Eh, they certainly executed the story... Out of existence.

Others? I hadn't seen much. Well, I had seen some clips circling around from the movie Beowulf (2007), but what I get from there is something I can only laugh at. It's nothing bad with evil dragons, but what I had seen there, well, it's something among the lines "what was seen can not be unseen".

Enough of rambling, well, there are good and bad movies, I just feel a little sad about that apparently many studios burn up good money on bad movies. It's sure though that they can get hefty revenues from nifty visuals, but come on, if there are certainly very good story writers around (just look at these and around in independent shorts), why they won't use them for good?

Until then, well, just watch these fine good shorts!