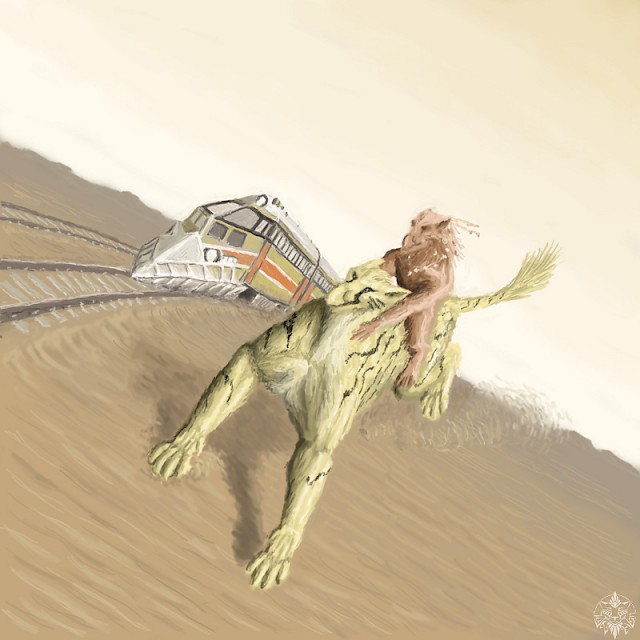 Just having some fun with doodling.

A Shiriat riding a Cyat, racing with a train. The species are from the Cheetaan Legacy universe.

So I finally decided to stop being such a scrooge I am, and embarked on an adventure to get myself a digitizing pad. Well, I didn't except the adventure part, though. I got lost in the goddamn city, couldn't find the shop for hours, finally recoiling home to check again where it is (it is a hour long trip either way). Long story short, at least now I have a digitizing pad.

This wasn't started from the scratch, I had some older sketch of it lying around which I decided to finish just for fun, nothing too serious.

While it looks okay, the "fun" part shows: Mostly probably I couldn't manage to convey the proper impression of depth (the train appearing too small), and well, while I took my time to research a bit on cat / dog anatomy (ending up mostly using cheetahs as references), I didn't pay any extra attention to the rider, just going by the "it will turn out somehow" principle. Okay, but sure could have been better.

The world of the Shiriat is harsh, almost entirely a desert with little green or blue to be found. They adapted to this world well, living there since many hundred thousands of years, more or less sustaining their technology level.

The Shiriat, resembling a reddish anthropomorphic wolf, and the Cyat, a horse sized slender cat like being are both intelligent, and are equal members of their civilization despite their anatomical differences. They have their specific roles in their society which they mostly accept. While due to their different biological orientations their natural, inherited intellectual traits differ slightly, their ability to think, to reason is quite similar.

On the picture an elder pair of them is shown, recognizable from the mane (which starts growing when they mature, and gets more prominent as they age), and the various trinkets the Shiriat is wearing. Those are not simply jewelry, they all represent some role in their society, some bond, some trait or capability, which they collect as they age. Both elder Cyats and Shiriats may be seen frequently ornamented by these, which is usually all they wear. The message of these is that the wearer is proud to relate to everything and everyone the jewels represent, and also is a kind of information, that (s)he is likely willing to engage in conversations about either subject (s)he relates, and possibly even tutor or help out if such need arises.

Most of the shiriat rail network is designed for speeds around 150 Km/h, that is, the lines connecting large cities. Most are powered with various biofuels, electricity via overhead wires is used in mountainous areas where the descending trains may feed back braking power. The cyats are the fastest land animals of the known world even capable to overtake these trains on short distances. Their build however is more emphasized towards endurance, to be able to run for large distances with some load, typically reaching 60 to 80 Km/h averages, which is faster than the interurban network's average speeds.