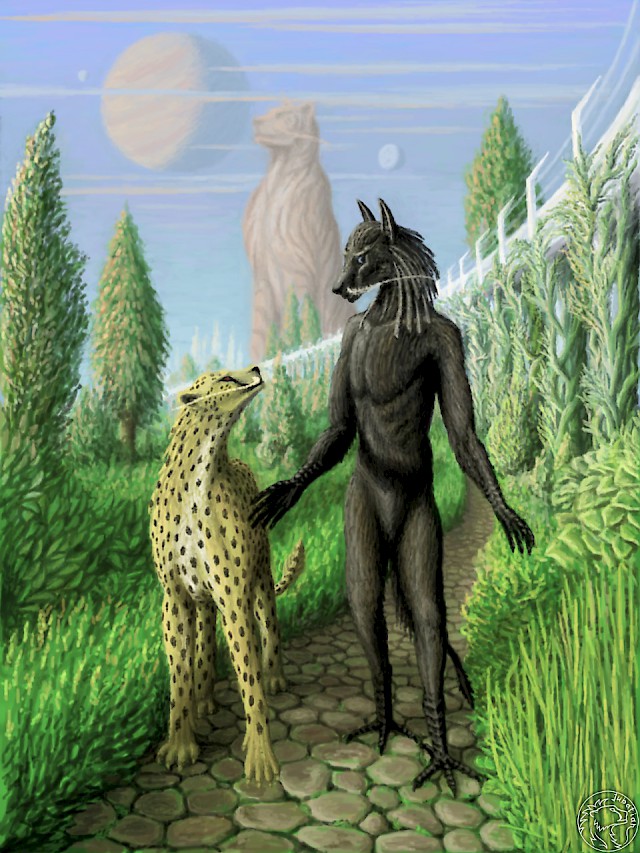 Experimenting with foliage, and at last, some proper colouring. The Cheetaan (Tani), first time portrayed in a typical city setting of theirs. In the distance, the organic statue of the centre, a white arch of plant-sustained Mag-Lev track, with of course a lot of green, and the two Tani races who are primary builders of this civilization.

This is not a shot taken in a park within the city, this is actually how most of the city looks alike. Before the interstellar wars even the capitol gave home to just about twenty or so thousands of Tanis (more wolves, somewhat less cheetaans) over an area of more than a hundred square kilometres. The Tanis simply need the foliage, not just for aesthetic value or because they would be so environmentalists, but their city is entirely powered by photosynthesis and is sustained from the growth produced by the plant life which cheetaan adapted for this purpose.

The heart is so given by the cheetaan, the four-legged race whose primary ability is the knowledge of genome, the art of forming the life surrounding them to their desires be it creation or destruction. The city however wouldn't be a city without the wolves without whom the cheetaan wouldn't even concentrate to form such settlements. They have the larger logical brain, the hands to think and craft, to plan, and to erect the monumental constructs a city is composed from.

The third Tani, the dragon will be left for some other time. There are a few tame dragons living in the "civilized world", but mostly they represent the brutal destructive power flying, hunting, and engaging in battles utilizing their electrical charge and the long range impulse laser in their throat capable to produce plasma even as far as a half mile away from the largest and strongest of their kind.