This is not my first time attempting to discover the wonders of vector art, but definitely the first time when I took it serious. That is, first time I decided to go through some moderate vector art building using Inkscape, and I even got to like the end result. So I decided to take it a bit like a walk through, hoping others of you may get the feel of the thing by it!

Edit (June, 2015): Note that the structure of the Tani Akri portrayed here does not entirely reflect that of how I imagine them today after some research in avionics. The design itself is also a bit lousy. I might redo something similar in the future. 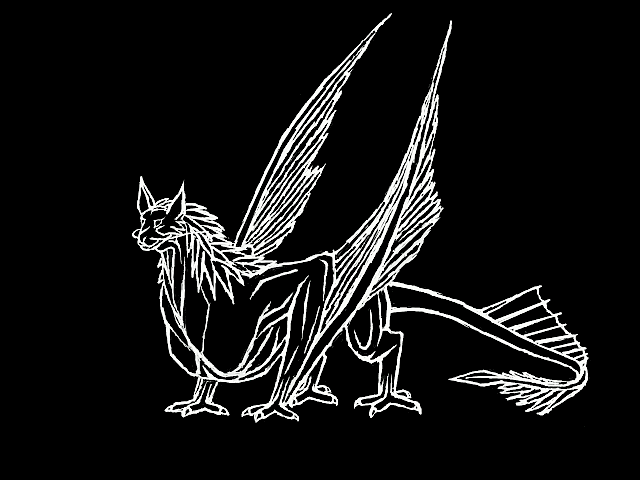 Lousy sketch of a Tani dragon, definitely needs some facelift

So let's start it! The sketch above is on which I based my work. It was simply drawn in Gimp in a few passes, only until I got a definite idea how the lines of this dragon should be organized. A properly scanned hand-drawn sketch could also work. The use of white over black has no significance, I just do it this way since my eyes are awfully sensitive to light.

Why not start sketching right in Inkscape? I don't think it is a good idea. Working with vectors has it's peculiarities, and those don't seem suitable for messing around, experimenting. It is easy to build up a vector construct, and then alter that, but hard to change the layout of it once done. The best probably might be simply using pen and paper, and a scanner when done.

Import the drawing in Inkspace on a separate bottom layer. I didn't find ways to alter the colouring directly, but to fade it out (so you can work over it without it getting in the way) a large translucent rectangle on the same layer will also do. Lock the layer (little lock icon next to the layer's name on the bottom status bar), create an another above to draw over it. Locking a layer disables selecting components on it, so it is pretty useful to organize your work.

Inkscape also has a nice trace feature which works wonders if you need something fast, but if you want to work with the lines, it won't quite do. I rather traced my shoddy line art by hand, keeping it's intended structure in mind. 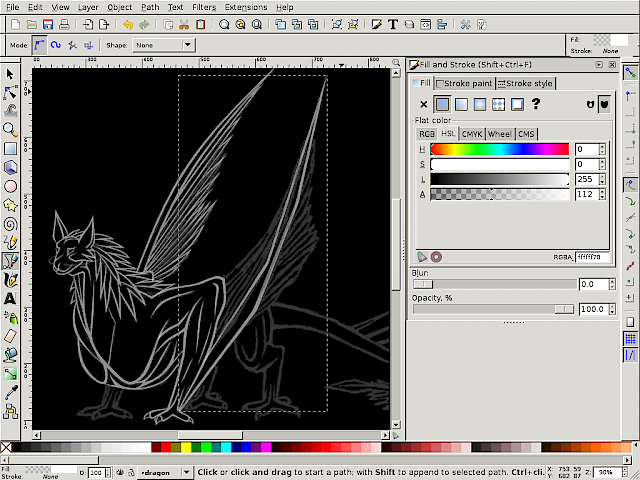 I found tracing by hand the easiest using the Bezier curves tool. It can be used to plot straight segments really fast, by simply clicking around with the mouse. You may drop points to wherever you feel necessary to follow the intended shape, later deleting nodes (select it in node editing mode, hit delete) will force Inkscape to deduct the best fit with the remaining nodes (this behaviour is handy to get rough curves easily). 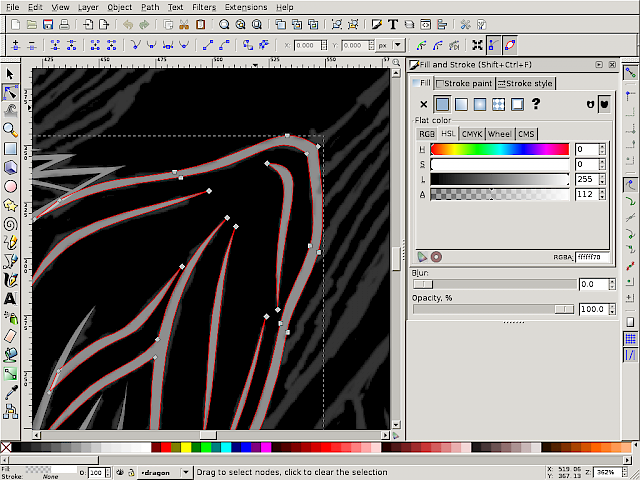 Tracing the dragon - working on the left arm

After the basic layout is done, using the Node edit tool the lines may be fine-tuned. Inkscape feels very intuitive in this regard, you may grab the points themselves, use the Bezier handles to alter your curves, but it also responds to grabbing the line itself, and follows the dragged mouse with the curve. Note the node tools on the toolbar though and pay attention to the node type: it is good to use straight or corner nodes appropriately where beneficial.

Shapes may be constructed by surprisingly little amount of nodes once you get the feel of how the lines behave. I found it rather easy to get the logic of these, and this is a very good thing to know: the core of most of the work in this program involves creating or modifying paths. It is just as intuitive as it can reasonably get.

Remember that it is not necessary to construct a path in one run. Especially later it will be very important to use the paths menu's combining features. I found Union and Difference the most useful: with Union you can merge two or more paths (even if they don't intersect), with Difference usually you may punch holes in shapes. 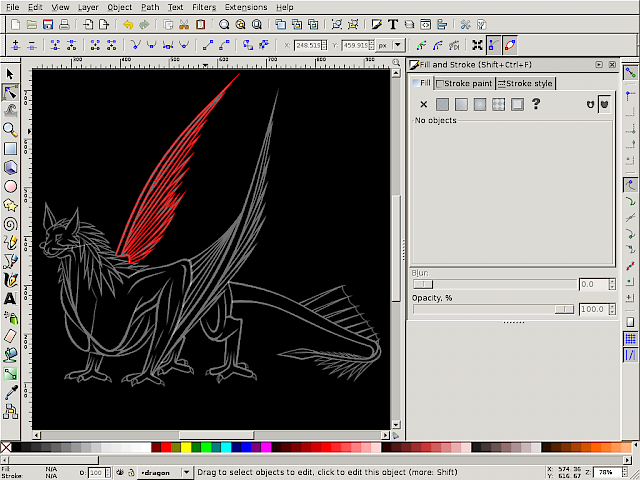 After tracing my line art, I thought on what to do next. I figured to just try to fiddle around with it further to see where I can get, so first as a reference I added a simple backdrop. 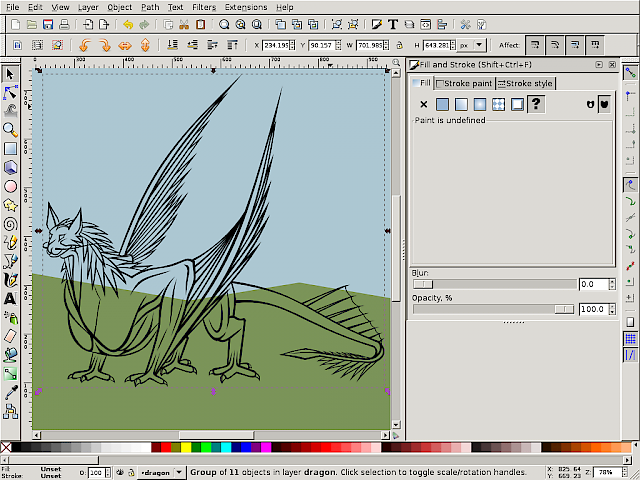 Here I also needed to change the colour of my line art from white to black, as it should show on the final image. It is useful to properly group your objects: here since I grouped all the components of the dragon (and the line art is even on it's own layer), it was a simple matter of selecting the group, and adjusting it's colour.

For the backdrop of course an another layer was added behind. It simply got two polygons (a sky, and a "mountainous" ground) so the overall idea is there, then got locked. Further the layout keeps the same: the line art, locked is sitting on the topmost layer, so everything I draw is underneath, and the background stays on the bottom.

The next step I though was just colouring the thing with flat colours, no shading, just to get the idea of the thing. For this I followed the path that probably comic designers take: I used only a small set of colours, say, a colour sheet. I was a bit lazy not populating the palette on the bottom with these: Inkscape offers many ways to grab the colours I need, so it was pretty much redundant.

Working on this stage is just the same as before, the difference is just that one does not build thin line art with the paths, but large blobs under the line art of the needed colours. It is nothing fancy, nothing hard either: the thickness of the line art's lines hide most imperfections made when laying down the blobs, so it needs little precision (just to keep the edges under the lines).

When done, of course I left it on it's own layer, created a new layer above, and moved on.

The next thing is to work around those nasty edges on the creature, such as that on the chest dividing the grey underside from the green body colour.

This is where the blur feature of Inkscape comes in, along with clipping. 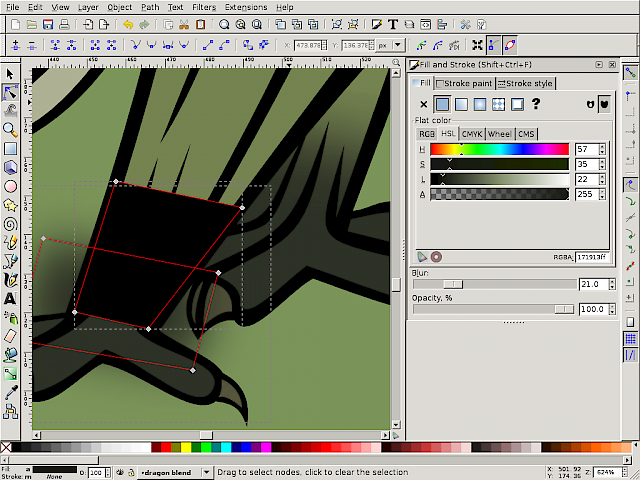 The blur feature gives your entire path blurry edge, which in most cases is not really what you want. Here comes clipping to the rescue: By laying down an another path around the area you need the blurred thing, and applying clipping (in the Object menu, Clip, Set) between the two, you will get it.

Inkscape's intuitiveness also kicks in here: usually I found I define the blurred blob first, and only then the clipping path. The clipping path will so be above the one I want to constrain. The clipping function is defined so it uses the topmost object to clip the others, so it just goes all right with this pattern. If for some reason this is not the case, you will need to rearrange the objects using the Raise and Lower commands in the Object menu. 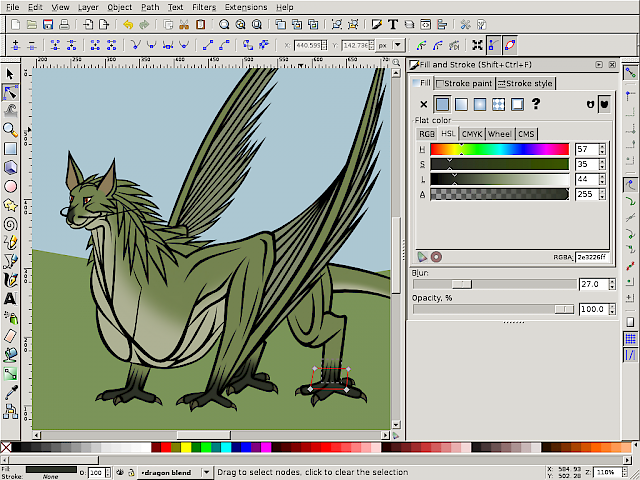 Well, it starts to look somewhat half - decent. But it still lacks some good shading. Putting shadows on is truly nothing much different than adding the gradients before. I however created a new layer again, so this another component is also well separated from the rest. 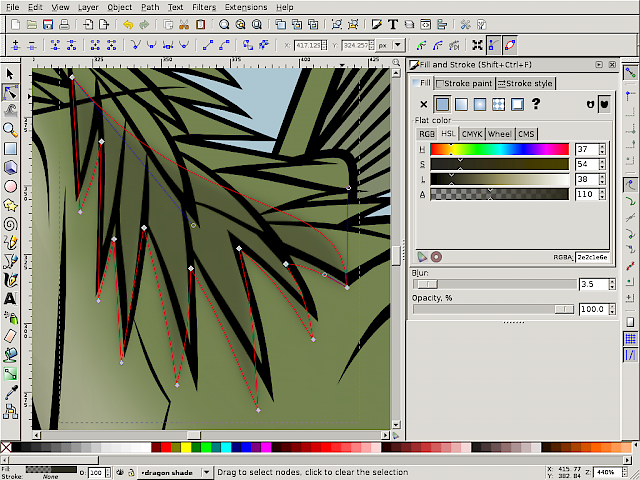 After a few tries I found that just adding black for shadow result in a somewhat dull image. So I put a little tweak in, and selected a dark colour going well with my image, and used that for most shadows, except for any which needed an even darker colour (such as the right legs).

Like on the example above the blob for the shadow may end up being much larger than the area it will effect after clipping. There the intention was to create the cast shadow of the mane on the body, so only the portion below the mane shows through. The big blob is a necessity so the other edges of it won't interfere with the visible part of the shadow. 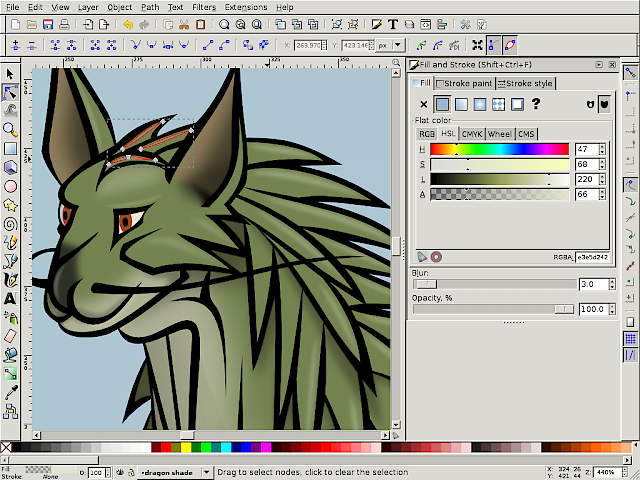 Adding highlights is similar. Here I also restrained myself from using bland white, for the same reason like with the shadows. Where possible I also grouped (path merging with Union) the paths together, so they are easier to handle.

Some areas needed more passes adding shadows. When an area (such as the chest) has a multitude of shading, it seems better to not try to do it in separate blobs, rather add a common large shade first, and darken that where necessary. With combining the problem is that where the two shapes meet, you will get an uneven darker blob, which you can't avoid. So better prevent it: use more shades stacked on each other, and it will look fine.

Finally the dragon was complete, so let's wrap it up. For the background I applied appropriate gradients (sky and ground) using the gradient tool to look right, then finally with some blobs I built up the cast shadow of the dragon.

This bottom shadow has an additional trick: It is composed of copying the same path three times there, with varying blur settings, and gradients to make the composition look like it blurs in the distance. 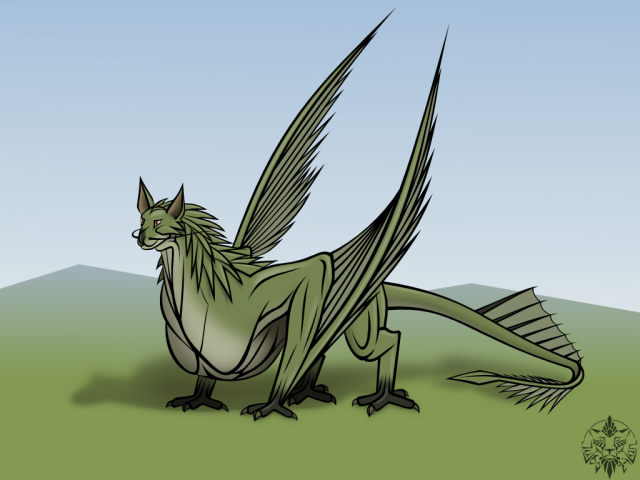 That's it! A whole lot better!

So done, this little adventure accomplished. Inkscape is a terribly nice program, very intuitive, it took just a few days to get somewhere with it. This dragon is nothing exceptional of course (I spend far more time on a drawing usually, even if it is just a reference art for some Cheetaan universe race or so), just shows that with relatively little effort very nice results may be accomplished in vector style.